Today's News: Keep on keeping on 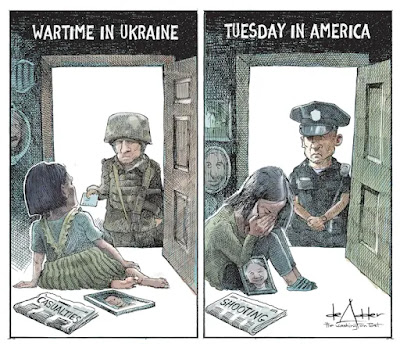 de Adder, Washington Post
It's not really surprising that the Ukraine Russia War isn't top of everyone newscasts anymore, I guess.
But it worries me when people complain about "how long" the war has been going on and why it hasn't been wrapped up already.
Three months, people! Just three months!
That's not even half of a hockey season.
And they don't seem to realize the magnitude of this war either.
Our son listens to a World War II week-by-week podcast - multiple fronts, dozens of countries, hundreds of thousands fighting, millions refugeeing. And six years. People were dealing with it for six years, with preparations for it to last longer.
So yes, there would be nothing unusual about the Ukraine Russia War going on for some time:

My @TheAtlantic post this week on a ceasefire in #Ukraine. https://t.co/rYTlJKJbGc pic.twitter.com/AYhteos8Fr

The rest of the world is regularly getting arms to Ukraine now, and more on the way.
But there is true horror in this war -- Russian war crimes.
Its not only that Russian soldiers are guilty of multiple rapes and torture and murders while they have been occupying Ukraine towns and cities, but also that the Russian government itself is trying to destroy Ukraine as a country.

Hundreds of thousands of Ukrainians have been processed through a series of 🇷🇺"filtration camps" in eastern Ukraine & sent to economically depressed areas in Russia as part of a program of forced removal, according to four sources familiar with the latest Western intelligence-CNN

On May 18, the heading “Denazification” appeared on the Telegram channel of one of the pro-Russian bloggers. He uploads videos every day, in which frightened and exhausted residents of the Kherson and Zaporizhia regions repent of disloyalty to the Russians. /1

Land concessions here means allowing genocide, deportations and executions. Cos that's what Russia will do in those conceded territories.

Ukrainian strategy in the Donbas has certainly been the subject of some discussion--primarily because they have taken the decision to fight for what seems like a shrinking pocket which the Russians are clearly trying to encircle. https://t.co/6hMYD1EQvF

As well as the Donbas, Markos thinks Ukraine is also attacking in Kherson to try to to cut off supplies for Crimea.
The West cannot allow Russia to win just because we got tired and wanted to think about other stuff:

we all thought Russia wasn't so dumb to invade in the first place,
so we've gotta see this news through that lens.
Though surely they cant think this is a good idea. https://t.co/tdVwyvz1uj

But I get it too -- we have all been distracted because little children died while police dithered in the hall.
There is no way to ever explain this level of ineptitude:

In Uvalde, the Most Enraging Press Conference in American History - The Bulwark https://t.co/o5ImaOwG0h

like, this man is standing up there claiming they didn't enter because they thought the shooter was barricaded in a room with no living children. BUT THE KIDS WERE CALLING 911.https://t.co/pRI1WGEvVv

Are you FUCKING KIDDING ME with this shit. https://t.co/mWSdrGaWS7

What would police say about a suspect who had changed his story as often as they have changed their timeline?

Hard to believe this story of Uvalde police incompetence could keep getting worse.
But with every tweet I read, it does. https://t.co/alY3pQIKS7

The level of cowardice has no bottom:

Just barricade all the doors to the police station except one. Problem solved.

The Uvalde police department actually had a SWAT team - no one has said where they were, or why the Border Patrol SWAT team finally went in 30 minutes after the Uvalde police had told them to wait outside.
There will be more to this story, I think:

They went through the motions of taking the training in order to justify taxpayer expense for their SWAT team. They thought they'd never have to use it. They were complacent and lazy. Stay tuned for possible evidence of corruption, dereliction of duty, etc. in coming days.

There was a demonstration today outside the NRA conference:

I just received an email from my kids' principal stating any students that participate in a planned walkout to protest gun violence in schools will receive an unexcused absence. Yeah, let's make it the kids' fault & not the adults entrusted with their safety.

My kids can walk.

In other news, the Ontario election is coming down to the wire, and Ford was trending today! #ThugFord
Because his security team arrested a lawyer Caryma S’ad for no reason at his rally yesterday:

— Canadian Veterans ABC (Anyone But Conservatives) (@CanadianVetsABC) May 28, 2022

No actual explanation, either:

I asked twice. Here are his replies, not answers. #onpoli pic.twitter.com/y8lZLi7nBo

Owning one of these gets you accused of being an elitist who’s imposing his lifestyle on other people. pic.twitter.com/o0vohsq1tq

A Ray Liotta anecdote, from one of my favorite movies: <

Devastated to hear the news of Ray Liotta’s passing. While he leaves an incredible legacy, he’ll always be “Shoeless Joe Jackson” in my heart. What happened that moment in the film was real. God gave us that stunt. Now God has Ray. pic.twitter.com/JQmk1PsuSK