Those who forget history are doomed to repeat it

A few days ago, Margaret Atwood put out a tweet (now it has 140,000 "likes") about how America turned itself into The Handmaid's Tail world because people couldn't get over high gas prices.
And in response I posted one of the "But Her Emails" memes, this one based on McCarthy's post-apocalyptic nightmare The Road, because it struck me how similar these two concepts were, that people will vote against the important things if they get distracted by trivial issues.

And now my little tweet has about 800 "likes" which amazes me, and it also got a few comments of its own.
But here's what surprised me: a number of the comments obviously did not understand the "but her emails" meme at all.
I had assumed everybody would remember the "but her emails" line came from 2016, when Republicans egged on the American media to make a big stupid hairy deal about Hillary Clinton using a personal email server for some of her Secretary of State emails. Because of this nonsensical "scandal", a few thousand voters decided her judgement was too risky so they just had to vote for Trump instead -- such a corrupt and incompetent man that America suddenly risked nuclear or climate destruction. Thus the "But Her Emails" meme was born. 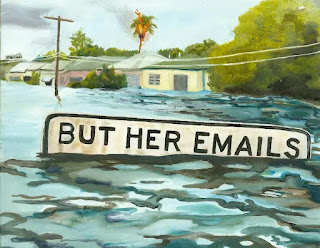 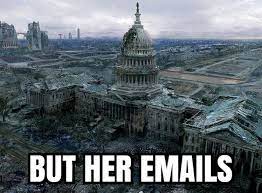 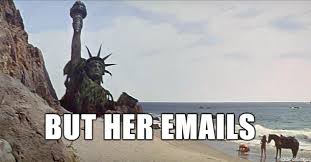 But I realize now that some people have already forgotten all about this, so the "But her emails" line doesn't mean anything to them.
Americans have a tendency to deify their presidents anyway, but when I hear people talking about how "Americans elected Trump" I want to remind them that only a few thousand votes swung the Electoral College and Hillary actually won overall by 3 million votes. (Of course, this works in reverse, too -- Biden also won overall by millions, but he needed a few thousand votes in key swing states that gave him the Electoral College win.)
This is why I think Democrats are absolutely right to worry about America forgetting about the terrible January 6 Insurrection and how Trump was responsible for it -- this convenient amnesia happening already, or at least it was happening until the J6 Committee started holding their hearings in prime time and telling the Jan 6 story in such a clear and compelling way.
Because those who forget history are doomed to repeat it - and people need to remember what a terrible president Trump is, how the people around him are terrible also, but how easy it is to let trivialities affect the vote.
I am hoping that support for Trump is starting to crack:

So the defense of Trump is two-pronged: he’s fat and he’s dumb. Remarkable. pic.twitter.com/kWbUtD0Ojl

But he knows it:

Are you maybe starting to understand why it's important to indict this fucking guy NOW?

If he declares his intention to run for another term, the DOJ will not prosecute him because it'll appear "politically motivated" and he will not only get away with it, he'll get reelected. https://t.co/Ssjts6052X

Gore Vidal dubbed it "the United States of Amnesia," and he was right. Things just happen there, with few noticing patterns or drawing inferences. And calling out bad faith arguments is so uncivil, because both sides are guilty and nobody keeps score.

Charles Schultz's recurring theme of Lucy pulling the ball away from Charlie Brown is an apt metaphor for the GOP pulling away good things over and over, with Dem politicians and voters never learning. Shoving history down the memory hole is how they cope.

The callousness of a rich woman brushing off the concerns of the working class who are increasingly finding it impossible to survive. You actual don't get why folks can't understand why care more about gas prices then a handful of idiots scaring corrupt politicians each of whom are have done far more vile things then the idiot rioters. If you don't get why Americans are starting to hate Biden as much or more then Trump, then you need to look closer at what is happening to folks who can no longer afford to pay their bill.

Gyor, voting for Trump and Republicans this fall won't lower your gas prices one cent.
Biden is trying to lower them by deleting gas taxes.
It is the Saudis and the oil companies who are callous, not Atwood. They are trying to get rid of Biden, pander to Putin, plus make some profits, so that's what they are doing.