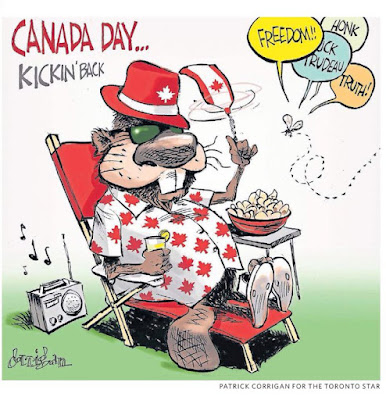 Conservative leadership update:
Maybe Poilievre has hired a new PR firm not staffed by 12-year-olds.
He released a video today that conservatives actually liked.  As for me, it worried me -- it doubles down on the Conservative "freedom" meme which actually means "be as prejudiced as you want, we won't stop you".
Some see through it:

Take Back your Freedom. "Reclaim what has always been yours." It's Cdn #MAGA - Pining for the Canada of the "good old days" when the wood in the video was used to build barns. Brace yourself for more messaging that rubs the tummies of "old stock Canadians" - making others cringe. https://t.co/ASNbMmwSVt

This message of "freedom" is a powerful one, even though what it actually means is letting Canadians be racist and sexist, underpay workers, operate unsafe factories, fire teachers, & dismantle any other "state interference" that actually gives us all real freedom.

Pierre Poilievre is a dendrophiliac.

And his little stroll with the the so called “convoy” boys yesterday fell pretty flat & he cancelled some speech he was due to give.

Can we make sure that meme includes the white nationalist he was having a chat with while on a stroll? I don’t want anyone to forget about that. https://t.co/c9f1Mx7qpR

Meanwhile, Trudeau-bashing continues apace, especially from Jean Charest's campaign manager who has a book to shill and gets a National Post column to do it:

“Woke”. I find it remarkable that the power brokers and wordsmen have successfully convinced millions of stupid people that being aware, knowledgeable, educated and fair is shameful and evil and that ignorance is godly. Genesis. Same old story. 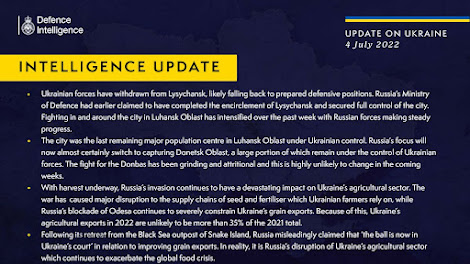 A useful thread here about the importance of the southern liberation campaign:

The Donbas has received much attention of late. However, the war in the south - and freeing Ukraine’s ports from the Russians - is a front of greater strategic importance. 1/7 🧵 https://t.co/vMyy7nM1oz

Taking back Ukraine's Black Sea ports is also important for grain shipping this summer and fall:

A massive and cruel Putin strategy to use the misery of starvation to force NATO to abandon the courageous Ukrainians fighting a RU criminal invasion. Our collective response must be a NATO naval campaign to break the grain blockade. https://t.co/FP580iWQBb

Even when Ukraine has to withdraw, it still manages to win:

Interesting and pithy comment by a Russian military blogger about the meaning of the Russian inability to cut off Lysychansk and therefore the Ukrainian ability to withdraw in good order. It reveals a basic inability of the Russians to execute modern combined ops warfare. https://t.co/rY9UWu3MzB

Saskatchewan update:
The Sask Party is trying to play both ends against the middle again.
In a pander to the People's Party of Canada supporters in the province (here they call themselves the Buffalo Party) who are convinced that tyrant Trudeau is so mean to poor old Sask, they set up an unofficial "Saskexit" committee which is running around now holding meetings (notice I didn't use "Sexit because, well...) and writing a report.
But now the rest of the province has noticed so they're pandering to us with reassuring noises that nobody needs to be concerned because there's really nothing to see here folks, move along move along:

"These meetings are about becoming stronger within confederation" 🙄
your entire province has fewer residents than Edmonton. get a grip, pouty pasty boyshttps://t.co/uGFad5FArS

Critics have pointed to the tens of millions of dollars in grants and funding the federal government has announced in Saskatchewan over the past couple of weeks, and argued that the autonomy meetings will stoke separatist sentiments.

Why do I have the feeling their "report" won't be suggesting that #Sask has to make a good-faith effort to work more effectively with the feds?https://t.co/mmyp0h9AFZ

What unprecedented, unilateral actions? You mean the ones during a world-wide pandemic? Or the ones where the fed govt provided funding to clean up orphan wells bc the oil companies didn’t? Or fed funding to help with backlogged surgical wait lists? Etc etc.

Here's an interesting tidbit from Saskatchewan's past - the RCMP believed the doctors bringing Medicare to Saskatchewan sixty years ago, in 1962, should be surveilled because socialism, communism, whatever...

Opinion: Newly disclosed surveillance of medicare pioneers puts the RCMP on the wrong side of history /via @globeandmail https://t.co/hluwQEOWfh

I was 13 years old when Medicare was introduced in Saskatchewan and it was an incredible story. I wrote a diary several years ago at Daily Kos about The Baby Who Died For Medicare. Today, 60 years later, we take Medicare for granted, as something we always had, but it was not easy to bring it in - only people committed to the people's welfare, like Woodrow Lloyd and Tommy Douglas and a few brave doctors, could do it.
Posted by Cathie from Canada at Monday, July 04, 2022

yes
The return to freedum
Bring back the old
No vaccines
No penicillin
No regulation on food inspection
No drug regulation
No speed limits
No returns
No guarantees
All buyer beware
Be free to die of your latest injury
Free from proof of truth
Free to do what ever you want with your Possessions ...burn, beat, destroy
Free to spout any garbage as gosple
You go lil pp pawliver
I can see we are already 1/2 way there.
Wave 12 and the new dark age
Fun times.