Today's News: "A whisper in our minds" 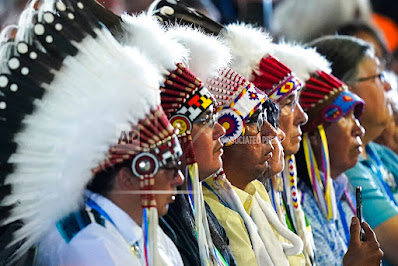 In the end, the Pope's apology is important, though it will not ease the pain.

Pope Francis was able to give the long-awaited apology, speaking in his language, but most of us do not have that ability any more. Our language is a whisper in our minds, familiar but at the same time, foreign. It was an apology that left us wanting. https://t.co/a7Ta4RadcV pic.twitter.com/LMbwSRrX8Z

“It is important to underscore that the Church was not just an agent of the state, nor simply a participant in government policy, but was a lead co-author of the darkest chapters in the history of this land,” said Murray Sinclair in a statement on Tuesday. https://t.co/OgwquBZ5TL

The apology fell short because it did not deal with the the actions of the Catholic Church overall:

The chief commissioner of Canada’s Truth and Reconciliation Commission has issued a blistering critique of Pope Francis’s apology to Indigenous people, saying “it left a deep hole in the acknowledgment of the full role of the church in the residential school system, by placing blame on individual members of the church.”
Mr. Sinclair issued a press release just moments before Pope Francis appeared before thousands of people at Edmonton’s Commonwealth Stadium for a mass commemorating St. Anne, grandmother of Jesus.
In 2015, the commission issued Call to Action #58, asking the Pope to deliver an apology in Canada for the church’s role in the residential school system. On Monday, seven years later, Pope Francis heeded the call, but apologized for individual Catholics who participated in the schools, not for the church as a whole.
...the Pope told the delegation [to Rome in April] he was sorry for the “deplorable conduct” of church-members who abused children in residential schools and vowed to bring the sentiments to Canadian soil.
Many Indigenous leaders had been hoping he would expand on his words in Rome and provide an institutional apology, not just express sorrow for the actions of individual Catholics.
But the apology reiterated much of what he’d said in Rome. “I am sorry. I ask for forgiveness, in particular, for the ways in which many members of the Church and of religious communities co-operated, not least through their indifference, in projects of cultural destruction and forced assimilation promoted by the governments of that time, which culminated in the system of residential schools,” he said on Monday
...Spectators gave the speech a warm reception, clapping and cheering after his expression of sorrow. Afterward, however, many onlookers said they expected more. “I’m happy to hear that he said the words ‘I’m sorry,’ but it wasn’t as encompassing as it could have been,” said Kukdookaa Terri Brown, residential school survivor and founding chair of the survivors circle with the National Centre for Truth and Reconciliation She also noted the Pope declined to mention sexual abuse or the Doctrine of Discovery in his speech.

#papalapology My thoughts are with Survivors who heard the apology from the Pope yesterday. But despite this historic apology, the Holy Father’s statement ignores the full role of the Church in the Residential School system. pic.twitter.com/BU5RGYq0ue

It’s a healing time for us. I didn’t expect mom & Aunty to be here. Kohkum lives on in the memories of the water, sand & air here. Pope Francis on the lands of my ancestors 2 pray 4 forgiveness is a powerful thing to witness. I take my healing. I take my power & I give love back pic.twitter.com/zrw8XoCluJ

Email ThisBlogThis!Share to TwitterShare to FacebookShare to Pinterest
Labels: reconciliation

After Gramas' teacup is shattered,
no amount of ceremony, or prayer or therapy or money or travel or empathy or realization by others or yourselves
nothing will unshatter it
nothing will get back the time it never held tea
nothing will take back the cuts it gave others
nothing replaces its lost purpose to hold scalding tea
reconciliation is trying to get comfortable walking on broken glass
I expect this tiny bubble of hope to lead to more despair
as all the feelings will remain
no matter what a tiny man from Italy does for a weekend.

Thanks for your comment. I appreciate your analogy to walking on broken glass - maybe we will have to understand that the healing journey may not have a destination where everyone can just declare the pain is over, everybody move on. Maybe it is the process that will be important, for settlers as well.