A terrible day in Saskatchewan

This morning we woke up to the alerts on our cell phones:

Canadian police searched across Saskatchewan for two suspects believed to have stabbed to death 10 people in an Indigenous community and a nearby town in one of the deadliest mass killings in the country’s history. https://t.co/jV6JYC93De

Ten dead, at least 15 hospitalized -- the news about this horrific tragedy has now gone around the world - I saw tweets tonight from many countries, and reports of many people overseas calling loved ones here to make sure they were OK.
The James Smith Cree Nation and the town of Weldon are north of Saskatoon -- here is an Associated Press map. 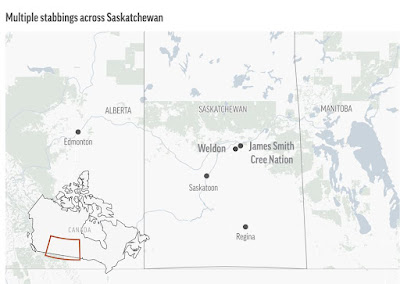 The first crew from Saskatoon triaged patients at the scene, the second aircraft brought a physician to the scene to lead the response

The @reginapolice continue to work collaboratively with our partners @RCMPSK on this investigation that started this morning on James Smith Cree Nation. Suspects have not been located. An active, focused investigation will continue until they are located and taken into custody. pic.twitter.com/8m91oSINIU

Some information is now being posted online in memory and tribute to the people we have lost and the Associated Press is also reporting on some of the victims tonight. I had thought I might copy some of these tweets and excerpts but then I reconsidered - I think its more respectful to wait a bit until official announcements are made.
But here is an incredible series of tweets I saw tonight. First, these:

Asking all Indigenous people to be kind to yourself. Horrific, unspeakable tragedy has struck #JamesSmithCreeNation. We all feel this pain. Reach out. Hold prayers, use your medicine, sing your song, use your gift to help those in pain & grief.

and let yourself breathe. These days will be difficult, and let your spirit find comfort in knowing that the Ancestors await our loved ones, no matter what; Love awaits them on the other side. Justice is not ours nor is judgement. Leave that to Grandmothers and Grandfathers.🪶💔

My sister and I talked about this, the brokenness of our nations. Hurt people, hurt other people. Add substances and alcohol and you can almost be assured something finds its way inside the heart and spirit. Something from death and darkness. There is no reasoning, only evil💔🪶

The last time I saw them in city limits was when my daughter left us. I walked to the field and told the kids to watch as I spoke with them. They lined up in one bright straight line directly in front of me. Then they were gone. I cried so hard. They gave me hope, comfort.🪶💔

In our cultures, we believe in our Ancestors who are these beautiful dancers in the sky. Their energy is this, the powerful beauty of it all. To love them is to understand them in this way. They show us who they are. Faith is in this belief we have, yes, comfort.🪶

My smudge tonight felt different. The connection between 🌍 and the Ancestors lingered for a long time before it burned out. As if it was trying to carry as much of the grief & anguish away from those hurting, as it could. Maybe I’m wrong, but that is what it felt like to me.🧡

Posted by Cathie from Canada at Monday, September 05, 2022

The RCMP is once again looking incompetent. They've been searching for Myles Sanderson since May, when he skipped out on parole. He had been serving a nearly five-year federal sentence for assault, robbery, mischief and uttering threats.

After the stabbings, the RCMP released mug shots of the two suspects, but the one for Myles was wrong and showed someone else. No wonder they couldn't find him!

Thanks for the comment -- these guys have been problems for a long time, it sounds like. At least this time the RCMP got onto the alert systems quickly and everyone was warned in time - there were news reports that a household refused them admittance because of the alert so it saved lives.