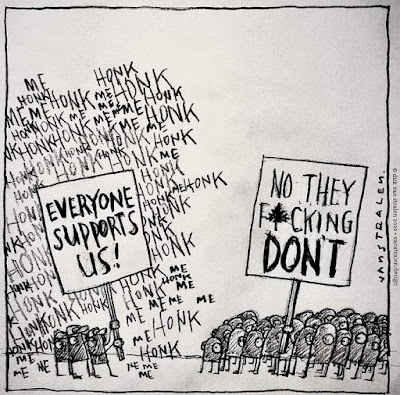 Now that the Public Order Emergency Commission hearings are getting underway, Canada is being reminded of just how awful the convoy crisis was, not only in Ottawa but also across the rest of the country.
It was exciting at first, of course -- hundreds of people exorcised their January blahs by lining the highways waving flags and cheering as they watched the big trucks thundering past. There was lots of "freedom!" shouting, and a warm sense of solidarity and joining together for a common cause and other fun stuff.
So the convoy seemed to think a majority of Canadians actually supported them.
But their Ottawa occupation and border blockades soon deteriorated into a noisy, chaotic, messy, dirty, disrespectful, horn-honking debacle.
They didn't have the sense or the leadership to just declare victory and leave.

We get 5 more weeks exposing the #FreeDumbConvoy for the complete losers they are with the #EmergenciesActInquiry lol..

We are now seeing a determined effort by Conservatives to minimize and trivialize what actually happened during the convoy crisis. I hope they don't get away with it:

The Govt of Canada - aka the city’s biggest employer - was shut down by the blockades. Most of the downtown office towers and hotels were closed. What do you think it would take to say the entire city (and country) was being harmed? https://t.co/iKEcTaa7NN

There’s a lot of gaslighting going on about what the convoy did in Ottawa and other places. It’s outrageous that people are suggesting it wasn’t a crisis. It was. https://t.co/e6QbXLwD26

So tonight I was checking tweets and also scrolling back through my posts in early February. Hey, remember what actually was happening? And remember the brave people who fought back?

These wonderful people plus the #RamRanchResistance

As requested, more heroes of the resistance. The neighbourhood “grannies,” who gave a thumbs down and a “you shall not pass” to a dump truck-lead convoy on their street. Also, blue jacket guy, a bundle of pulsating furiosity who unloaded on some horn honking truckers. 1/ pic.twitter.com/KHv9V1zW4I

Only in Canada could you shut down an insurrection with a gay cowboy song!#RamRanchResisitance #KluTruxKlanGoHome pic.twitter.com/Sm9ZTLP8th

Any final parting words from #Ottawa to the convoy?

Imagine that... They don't appreciate the noise distracting them. The #FluTruxKlan #FreeDumbConvoy #TimbitTaliban are fucking babies in adult clothing. https://t.co/HuJgr0nGxx

They did much more too!!! https://t.co/bubVQNKUxX

It's starting... across the country. And it's getting stronger by the hour. Time for the children to go home.

As the weeks passed, the protests were spreading -- the Convoy attempted to set up protests in Toronto, Quebec City, Winnipeg, Regina, though the provincial governments in these cities made sure that local police shut things down quickly, after seeing what was happening in Ottawa.

Ottawa believed that the convoy would leave in a couple of days.
By the time it was approaching Toronto, the Police knew better.
They immediately took drastic action.
e.g. Roadblocks >> difficult for vehicles to get downtown
Or to access Queen's Park https://t.co/H3ZUYAQxbm

Also there were attempts to restart the border blockages:

Windsor police Chief Pam Mizuno says yesterday "6 to 7 transport trucks" were driving to Windsor from Ottawa on the 401.

"It is suspected this convoy was heading to Windsor."

They were about 250KM away (which would be just before Woodstock) and has turned around, says Mizuno.

All in all, it began to look like an attempted coup:

This is starting to look like a slow-motion fascist coup, a January 6, 2021 where the police are letting it happen, aimed at ending the Trudeau minority government. It is the most severe attack on the legitimacy of the state and its democratic supports in our history.

We are in the midst of an attempted coup. It will be my fifth. I smell blood. #cdnpoli #5thColumn https://t.co/bHS1oNSzGe

It was the Emergencies Act that turned the tide, not just in Ottawa but in the rest of the country:

I seriously believe exactly this led to the 24hr clearance at Coutts.

There were children in those trucks, and concern they were being used as human shields against police action.

Flashback: Emergencies Act enacted by the federal government includes a prohibition on bringing children to sites where the protests and blockades are happening. Cops estimated that 1 in 4 trucks parked – about 100 – had children living inside. https://t.co/P49CNVbe5V #cdnpoli

It wasn't just Ottawa. More important I think were the border blockades & US trade disruptions, the spreading chaos in cities as people gave up on police & tried to stop the Convoy themselves, & the need to re-establish respect for rule of law & for elected authorities.

All in all, it was a scary time. We need to remember what really happened:

4) psych torture & economic terrorism is being used.
5) organizers have setup supply chains in Ottawa and Nationally including comms messaging.
6) they want to over throw an elected government.
7) the office of the prime minister is under direct threat.
8) children are shields

This is, indeed, the original, most baffling failure. https://t.co/tbbljw98fR

They can travel, work etc. All they have to do is get vaccinated. This is not a serious imposition in reality, even if they imagine it to be so.
That they do so imagine is sad. They deserve our empathy and understanding. They do not, however, get to set policy. https://t.co/U7fcMQxQVj

And this segues neatly into a Covid updates:

Three years ago I had no idea that there would be two sides to the debate on whether to let a deadly and disabling virus circulate around the world unmitigated.

We have now had our Moderna bivalent shot.
The news about additional variants keeps getting worse and worse -- I think we might as well accept it, that everyone will now need to get a Covid booster two or three times a year for the foreseeable future, just the same way as we get annual flu shots.

The “I had Covid and I’m fine” statement is starting to sound like the “I’ve smoked my whole life and I didn’t get cancer”.

That’s great, but a lot of other people weren’t so lucky.

When politicians like @PierrePoilievre @ABDanielleSmith say that they will never, ever mandate vaccination, it's useful to be aware of how this can play out. New Yale study. https://t.co/dAwmv7b1AL pic.twitter.com/6V0Sx4KUuf

Moving to Ukraine, the war continues to go well for the Ukrainians -- people will be writing books about how Ukraine won this war.

We spend a lot of time on what the Russians have got strategically wrong. This is excellent from Mick Ryan (@WarintheFuture) about what Ukraine has got right. https://t.co/UDDx41tgzE