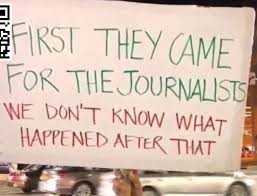 In his daily CNN newsletter, Brian Stelter gives a summary of some of the attacks made on journalists over the last few days in the George Lloyd protests across the US:

[there have been a] shocking number of cases of reporters being assaulted and arrested while covering the unrest. This wasn't just a stray rubber bullet here or there -- it seemed, to a lot of people, like targeting of journalists, by both police and in some cases by unruly protesters.

>> CBS' Michael George tweeted: "I've covered protests for 15 years across the US. This is the first time I’ve ever seen police actively and intentionally target the press with rubber bullets, tear gas, and arrests. Scenes reminiscent of China, Iran. We remain determined to show the country what’s happening here..."

>> On Sunday morning I interviewed LA Times reporter Molly Hennessy-Fiske, who described the moment when Minneapolis police fired rubber bullets Saturday night: "We were shouting 'press' and I was waving my notebook at them. They just kept following us and firing at us..."

As Baltimore Sun media critic David Zurawik wrote in this column, "the question that remains is why we are seeing more physical attacks on the press than we did, say, in 2015 in the uprising in the wake of the death of Freddie Gray." Echoing what he said on CNN, Zurawik wrote, "There are a lot of reasons for the rise, but here's the one I think making the greatest difference: almost four years of the president of the United States demonizing the press, calling reporters 'enemies of the people' and 'scum,' and encouraging rallygoers at his events to intimidate them..."

I am wondering if some police are also blaming the media for what is happening, in a "shoot the messenger" reaction -- maybe they have the idea that they could beat people up any time they wanted, if it weren't for cell phone cameras and reporters publicizing it when they do.
The actual problem, of course, is that police are beating people up.
And journalists keep on reporting it when it happens.
Posted by Cathie from Canada at Sunday, May 31, 2020