This the greatest Halloween decoration I’ve ever seen…. pic.twitter.com/V4G5kS5le0

Give them something good to eat: Animals at the Chester Zoo enjoy some Halloween treats. pic.twitter.com/NA9iTmuYpn

Gurdeep is a true Canadian treasure:

Happy Halloween!
From the Yukon wilderness, I am forwarding Halloween joy, hope and positivity across Canada and beyond.
YouTube: https://t.co/7UZu7LDTpK pic.twitter.com/pGnBXP0qxK

And at no 1: Seven Footprints To Satan, by Abraham Merritt. Fantastic Novels Magazine, January 1949. pic.twitter.com/1dUoL6LNUZ

A tiny landscape painting on a pumpkin seed 🎃 pic.twitter.com/AAAEuMYG49

Every year, somebody takes it just a little too far:

So about that weird Gables police display https://t.co/UwqXrYlzLy

And of course, the greatest music video ever made:
Posted by Cathie from Canada at Sunday, October 31, 2021 No comments:

Next time, dogs own people.

My husband purchased a world map and then gave me a dart and said, “Throw this and wherever it lands—that’s where I’m taking you when this pandemic ends.”

Turns out, we’re spending two weeks behind the fridge.

“Why do dogs always race to the door when the doorbell rings? It’s almost never for them.” - Norm MacDonald.

Little yellow fish gets so excited whenever he sees this diver — watch him surprise her with a gift 💛 pic.twitter.com/nEByULlfRL

Giant rescue horse finally gets to relax after working 20 years straight — and when the vet prescribes beer every day, he LOVES it 🍻 pic.twitter.com/U5D4Cm0cRd

this dog owner spent $400 to find out why his dog was limping only to learn he was copying him out of sympathy
(jukin media) pic.twitter.com/lmhmtZu908

They did the mash. Thank you to giant pumpkin growers Larry Nelson and Jacob Baldridge for the gourd time! pic.twitter.com/cuNtwafIA0

Posted by Cathie from Canada at Sunday, October 24, 2021 No comments:

There is such truth here:

And truth here too:

Not been guilted into going. This was the right step. The Chief of Tḱemlúps te Secwépemc said it right, actions speak Louder. And him coming on his son’s birthday is the Loudest Action. Grateful that Chief Rosanne Casimir lived streamed this closed event.

“Instead of talking about truth and reconciliation, people talked about me, and that’s on me,” Trudeau said. https://t.co/rIqOs2bOcd#cdnpoli

And Halloween is coming up!

Meanwhile, here in Saskatchewan, our COVID situation is so bad - I cannotimagine the chaos and death in Saskatchewan hospitals right now -- and our premier Scott Moe is leading us by naming some guy in North Battleford as the director of Covid response, and immitating a deer in the headlights:

I'd say "you've got to be fucking kidding me", but how shocking is anything these petty, corrupt bumblefucks do anymore? #skpoli

The *lethal* obstinacy in relation to working with the Federal government here is worthy of an actual trial here. https://t.co/sTZ2dTmtF0

Or, hear me out, Take The Fucking Actions that doctors and scientists are telling you are necessary to PREVENT so many people from needing ICU care in the first place.
In other words, protect #skhealth instead of playing #skpoli on #covid19sk https://t.co/TVhCBPu0tw

Posted by Cathie from Canada at Monday, October 18, 2021 No comments:

Time for some funny stuff!

An ad by a bus company. Nice. 👇👇 pic.twitter.com/jkE3P6vlpE

"why are you crying?"

because bears sit and look at good views pic.twitter.com/cqaN0LJ4pF

Reading about white collar crime in the new yorker and this detail is just perfect https://t.co/Ou7ZV9Gbgg pic.twitter.com/ZE3pbMpLOY

1 of the city high schools here was quite creative. They had plumbing issues, so once or twice every spring whe the weather got nice, in a scene right out of Fast Time At Ridgemont High they synchronized their watches & simultaneously flushed every toilet for an easy 2 day vacay.

And this one was so sweet it broke twitter - it got 700K likes:

Posted by Cathie from Canada at Tuesday, October 12, 2021 No comments:

Why we need to hear The Story Of January 6

Here in a nutshell is The Story Of January 6 -- an impressive summary by Huff Post White House correspondent S.V. Date describing what happened in the Trump Insurrection: 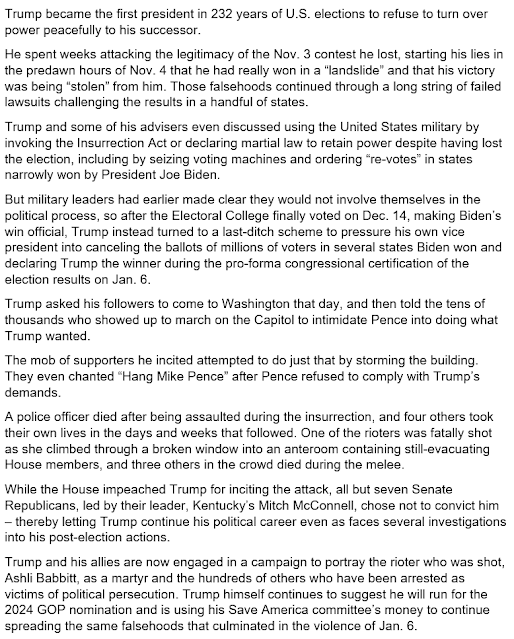 This is what Americans need to be told about, every day, every speech, from Biden, Harris, Garland, Pelosi, Schumer, Psaki, AOC, Warren, and everyone else who wants Americans to understand and remember what happened.
Yes, I know there are hundreds of charges underway around the country, and yes, I know there's a commission finally working on it. And yes, I know there are a few books coming out, and news stories written often about this or that picayune event or mystifying investigation.
But Americans aren't going to put it all together by themselves. They need to hear The Story in every speech that is given by Democrats.
Particularly now, as Trump starts up his rallies again, and gets coverage from media across the country as though he was just a normal person who is going to run for president in 2024.
Instead, this is the kind of shit Americans are now hearing:

Trump urges lawmakers to focus on the 'REAL insurrection' that 'took place on November 3' 🚨https://t.co/dRxT5Si6zM

I believe Americans have heard more in the last 9 months about the Biden dogs than they heard about the Trump insurrection.
Now, I agree that Major and Champ were Very Good Dogs, and its sad that Champ has died and that Major isn't as well trained as he should be.
But what Americans really need to hear about is how close they came to losing their republic.
Posted by Cathie from Canada at Saturday, October 09, 2021 No comments:

So I just started a short-term job and one of the things I am going to be learning about is how to host Zoom meetings. Not, like this guy, I hope:

We are all in this video pic.twitter.com/ZebenP2Aid

Posted by Cathie from Canada at Tuesday, October 05, 2021 No comments:

Well, the boys gave it a good try, but couldn't quite get into the post-season this year:

Vladimir Guerrero Jr. was sitting in the dugout watching the BOS/WAS game. Sat for a few moments after the Devers HR, the walked up the tunnel. #bluejays

I think I stopped breathing for a minute when I read this! This would be every Blue Jays fan’s dream off season signing! Imagine a rotation of Stroman, Ray, Ryu, Manoah with this offence 🤮 Legit title contenders! #WeAreBlueJays https://t.co/2hqXXf3dQe

Man, I feel for the @BlueJays right now. Praying the Nationals comeback in the 9th. Wanted to see that Canadian squad in the playoffs more than anything. Beyond bright future for them regardless! 🗣🇨🇦

Too bad about the Blue Jays missing the MLB playoffs. I’m sure it was Trudeau’s fault. /s

Now that Trudeau has apologized to Chief Rosanne Casimir in Kamloops about not attending their ceremony on Sept 30, I think the Canadian media will stop talking about Tofino-gate or whatever we are calling it. Embarrassment is what I call it

Some of today's funnier stuff too:

it's the otters' island; as soon as they develop opposable thumbs we're done for https://t.co/3K8Vteammv

Watch until the end:

Posted by Cathie from Canada at Monday, October 04, 2021 No comments:

Today's news: So maybe next year our TRC Day will actually be about Truth & Reconciliation?

Join your mostly white media in making #TruthandReconciliationDay all about a white man. Couldn't fail harder if we tried.

Does anyone else find it rather odd that the Trudeau in Tofino story is now on its second day? Ridiculous.
But the pearl-clutching sure did help Canadian media find an easy story hook for their TRC Day coverage  -- otherwise, hey, they might have had to talk to some Indigenous leaders and do some research and think about truth and reconciliation, and maybe, you know, even write news stories about all that uncomfortable stuff.  But then Trudeau flew to Tofino and the media butterflies fluttered - or should I say, flitted - right after him and this solved all their TRC Day news problems.
Maybe by TRC Day 2022 we will actually focus on truth and reconciliation itself -- though I'm not holding my breath.

Can the Globe & Mail, Global, CTV, Postmedia and the CBC at least donate all the revenue in sales they've generated from covering the Trudeau family Tofino trip to Indigenous community centers...

Not too many stories today about TRC Day and survivors..

I can appreciate you being pissed at JT.I also appreciate that some First Nations people aren't.I'm white, a settler...respectful to know it's not my call. But I have to call out the disgusting media for appropriating the TRC Day for a self-serving, cynical purpose. I have to.

I won't object to media outlets complaining American-style about PM Trudeau being away with his family on the Day for Truth and Reconciliation if they ever employed an Indigenous person in the newsroom before they were shamed into it. #cdnpoli

Prime Minister Justin Trudeau introduced September 30 as a National Day for Truth & Reconciliation. It's now a federal paid holiday. The Premiers of BC, AB, SK, ON, QC, NB & NL all chose not to recognize it as a paid holiday. But guess who the MSM has chosen to harass & demonize?

I don't care if he rolls up his sleeves, takes a day off, wears funny socks, his hair, his beard etc.

I care about his policies. https://t.co/HULxQM8d7i

@SportsCentre covers @eliankou & the National Day of Reconciliation while Canadian news chatters on about Trudeau in Tofino.
What is wrong with this picture?

There are many other important things that Canadians to talk about:

‘I think there is a growing body of reasonable people out there who are trying to figure out what to do… but… there is a group of very vocal, very influential people who hold significant positions of power who are working hard against reconciliation,' https://t.co/rCd91pIm6i

Through the summer and fall I manually converted the Truth and Reconciliation's summary report for e-readers with full accessibility markup. It was really important for me to read the report and I think everyone occupying these lands should too. https://t.co/8p7T1Tn0QC

'My hope is that it doesn’t end after today': Sixties Scoop survivor Marcel French says he hopes the sea of orange shirts and momentum from the National Day for Truth and Reconciliation continues. | @michellekarlenz https://t.co/BMCykRKCX2

An anti-masker in line behind me turned to a masked, elderly woman behind her and said, "why are you wearing a mask?" She replied, "so I won't catch whatever it is that makes you act like an idiot.”

This is a thing about which we can all be proud. https://t.co/pUdJUjoHJP

Go Jays! Here's the Blue Jays logo done by an Indigenous artist Kory Parkin who has other wonderful artworks as well.