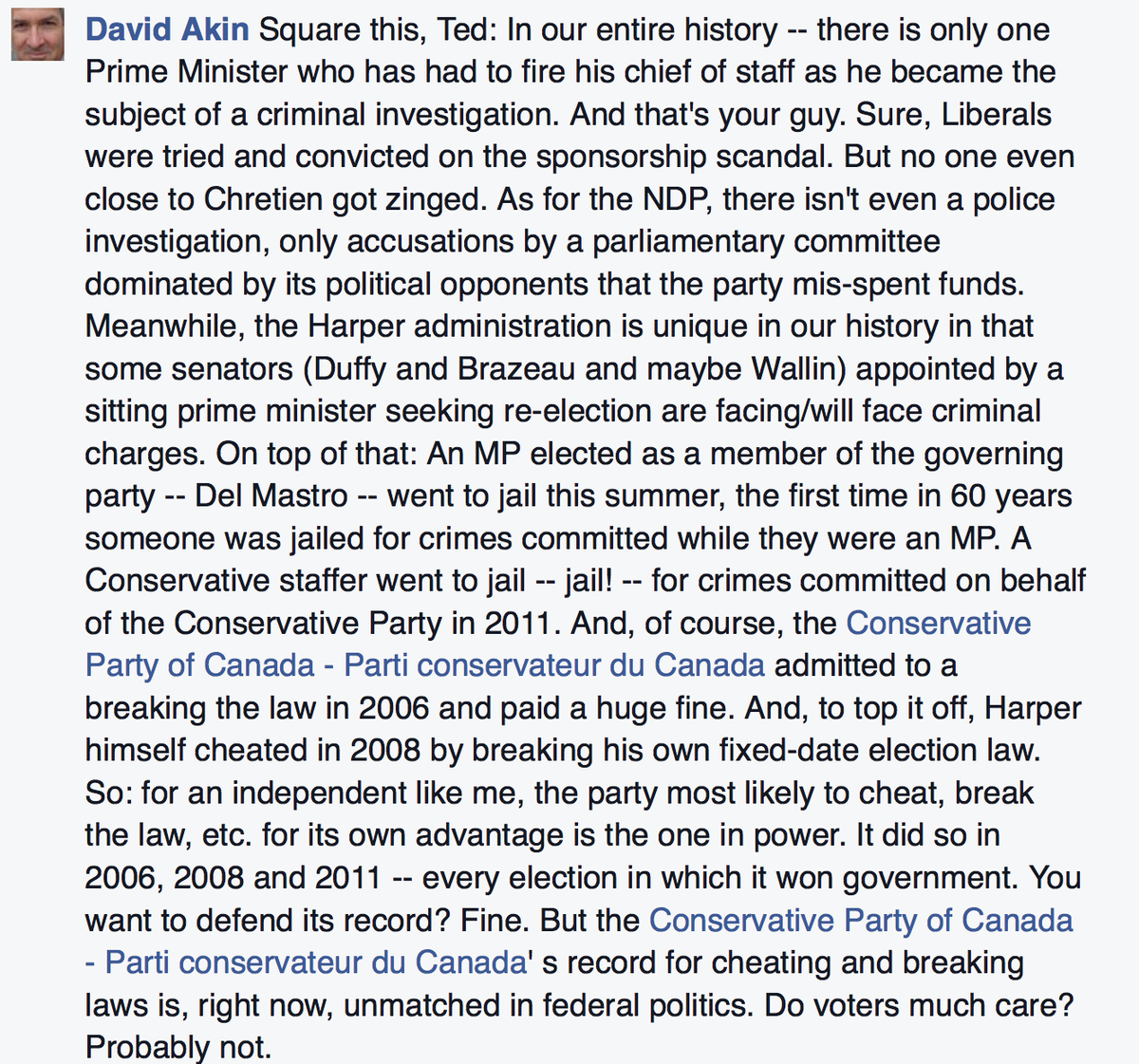 Posted by Cathie from Canada at Wednesday, August 26, 2015 No comments:

From the Mound of Sound, writing about the Duffy trial revelations: The Disaffected Lib: Now It Makes Sense. It Was Magic.:

Claiming Novak didn't open an email is about as convincing as telling the teacher the dog ate your homework.

Posted by Cathie from Canada at Friday, August 21, 2015 No comments:

Well, I have to admit the Argos did get one right

Actually, I argue that the #Riders won the game, we just lost the officials!
Posted by Cathie from Canada at Sunday, August 09, 2015 No comments:

Debate prep for the rest of us

Excellent column from Greg Fingas on what to watch for in this debate:


the overarching theme should be one of judgment under pressure.... only the debates tell us how a leader relates and responds to competing parties and philosophies in the heat of the moment.

He also ways to watch for:


each leader’s willingness to respond directly to questions and challenges, even when they don’t fit neatly into a party’s existing talking points... (and) a leader’s ability to defend policies at more than a surface level ... watch especially for any willingness (or refusal) to acknowledge when an opposing leader makes a point worthy of consideration.

Chantal Herbert discusses the importance of the debate for Trudeau:


Liberal Leader Justin Trudeau has the most to win from the exercise. It is his best chance to shore up his battered credentials as a serious contender for the job of prime minister.
In the reverse, an underwhelming Trudeau performance could relegate his party to the sidelines of the main battle once and for all, and take a heavy toll on the morale of his troops.


So far all these photo ops of Harper with people behind him look like hostage videos. Vote for me and dad gets to come home! #elxn42
— Steve V (@FarAndWide) August 4, 2015

Posted by Cathie from Canada at Thursday, August 06, 2015 No comments:

The Harper Con tradition to bribe us with our own money

Quel suprise! The Harper Cons have announced another tax credit, this time for home renovations:

The tax credit would apply to renovation costs between $1,000 and $5,000, allowing a taxpayer to get back up to $750 a year.
“The home renovation tax credit helps every homeowner regardless of income,” said Harper

Yeah sure, except that people making lower salaries don't usually have even a thousand dollars to spend upgrading their houses, and don't benefit much from the plethora of Harper Con tax credits anyway.
But bribing us with our own money is a Harper Con tradition. 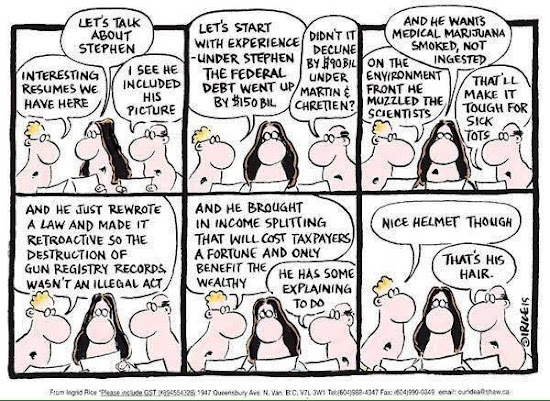 Hat Tip to Politics and its Discontents for this great cartoon.
Posted by Cathie from Canada at Tuesday, August 04, 2015 No comments:

Well, those annoying Harper Con ads we've been seeing all summer appear to have convinced Canadians that Trudeau "is not ready" to be Prime Minister.
But they haven't made The Kitten Whisperer any more endearing.
So who is left standing?
Yes, you've got it:  NDP surges past Conservatives, Liberals in latest poll | Toronto Star:

And it couldn't happen to a more deserving guy.
A guy who did NOT vote for Bill C51.
Posted by Cathie from Canada at Monday, August 03, 2015 No comments: