Posted by Cathie from Canada at Thursday, December 31, 2015 No comments:

Posted by Cathie from Canada at Thursday, December 31, 2015 No comments:

The Christmas gift anyone can give -- saying "thanks!"

I usually enjoy reading the various advice columnists around the web, and particularly at this time of year, a lot of the columns are about how difficult it is to buy Christmas presents for their ungrateful, greedy relatives and how awful are the gifts they receive in return -- like this one from Captain Awkward #809: Gold, Frankincense, Myrrh, and Judgement and this one from Carolyn Hax I Hate Christmas.
I have come to the conclusion that there is really just one “gift” we can all give to our nearest and dearest this Christmas and it is this: Be visibly pleased and vocally happy with any present that we receive from them; no matter how awful or inappropriate or ill-fitting it is -- just smile and say “how good of you to think of this” or “it's just what I wanted” or “what a clever idea” or even just “thanks so much for thinking of me”.
Even if its one of Dr. Grumpy's giant shrimp pillows: 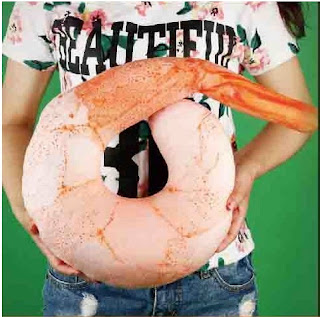 Posted by Cathie from Canada at Monday, December 21, 2015 No comments:

What the cowardly Donald Trump and his idiot supporters are now saying about Muslims is no different than what the Nazis were saying about Jews just 80 years ago.
Even Dick Cheney thinks Trump is going too far, but Trump won't care.  Trump has seized on the deaths of 14 Americans to make this horrible incident into America's version of the Reichstag fire, an excuse for violent and racist rhetoric.  At its core, of course, is his own profound cowardice, a deep-seated fear of anyone who isn't white.
Rachel Maddow thinks Trump is really just trying to get himself disowned by the Republican party.
No, I don't think he is either that smart or that devious.
He's just gone crazy and he wants to take America with him.
UPDATE:  Yes, they went there: 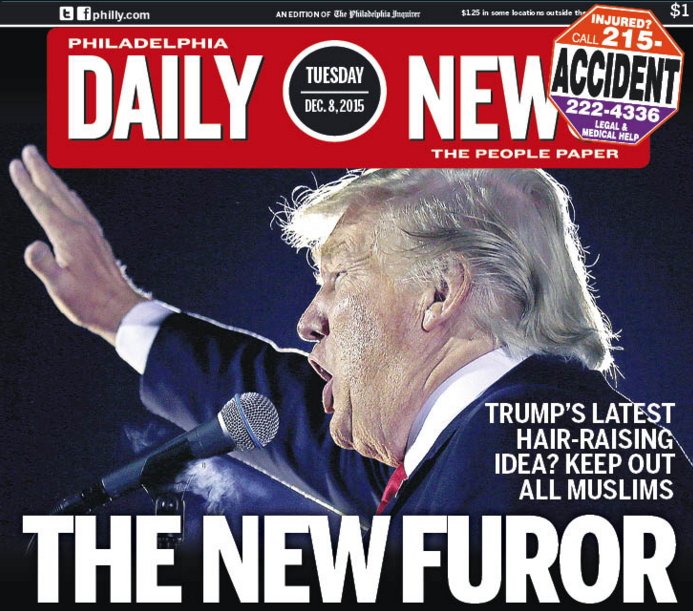 Posted by Cathie from Canada at Tuesday, December 08, 2015 No comments:

Iraq War Do-Over: Lance Mannion writes about how the media really really want to cheerlead for another war in the Middle East:


It's not just the neo-cons who want a do-over on Iraq.
By and large, the American press wanted that war as much as the Bush Leaguers did.
The media cheerled for the invasion. They reported the war as a rolling victory even after it was clear it was far from that.
They propped up the Bush Administration. Tried to sell us on the idea that W. was a great leader. And they'v never really admitted any of it.
Let alone apologized.
And rather than admit they were played for fools and suckers and certainly rather than admit they were glad to play along...
...they're itching for another war. Wars sell newspapers and advertising. Covering wars boosts careers.
It makes desk bound editors and pundits feel like heroes.
And this time out, they think, they'll get it right.
Not that they think they didn’t get it right the first time.

And, like with Iraq, the media has no idea at all exactly where the war should be or who exactly it should be fought against or what the goal should be or how to decide who has won.
They just think Obama should somehow fix in six days what Bush spent six years breaking.
Posted by Cathie from Canada at Saturday, December 05, 2015 No comments:

I expect any minute now some Canadian media will start using the term "Nannygate". The stupid, it burns!

As the Globe and Mail editorial rather grudgingly admitted, nobody expects the Trudeaus to pay for the gardeners or the cleaners or the housekeepers who look after their official residence. But now I guess the media expects us taxpayers to get all huffy about paying for their child care.

So does Canada want to elect politicians who have children? Well, somebody needs to care for those children, and its fine with me if the taxpayers cover the costs while mom and dad are busy doing the public's business.

I had no problem with Alison Redford taking her daughter with her on trips and doubtless the Harper family also hired nannies for child care when their children were young.  So I see no problem with the Trudeaus taking their children with them when they travel, and a nanny too.  Because no, they're not going to just hire babysitters for the evening through the hotel concierge.

Now we have to listen to the Harper Cons whining about Trudeau's child caregivers --  remember, this is the same bunch saw no problem in billing the public for Harper's haircuts.
Posted by Cathie from Canada at Wednesday, December 02, 2015 No comments: