Taken to the cleaners in #Ferguson

Tabitha Southey has a brilliant column in the Globe and Mail  Hey, white person, imagine if you were stopped as though you were black :


...Let’s imagine, for example, you’re being stopped and questioned by dry cleaners, and see how that goes.
Dry cleaners approach you often. You get to know the drill. “It’s linen, dry cleaner,” you say politely, as your mother taught you to do. “Natural fibres do wrinkle; it’ll relax in the heat. You don’t need to press this. Now, if you’ll excuse me, I’m late for a meeting.”
It starts to get to you after a while, white people – a short while, I imagine, knowing you as I do. “No, I don’t need to come in,” you snap one day, upon your third grilling that month. “It’s hand wash, dry flat. I read the label, I know what I’m doing here, I got this one.”
Yet, still they stop and ask, “Do you starch that collar?” or demand to see your dry-cleaning ticket.” They check your pockets and when you complain about it, people tell you that’s their job.
Now, suppose on top of everything else, when you do go to the dry cleaners, when they’re needed, their response time is terrible. There’s no same-day service for you, white people, even when you’ve a wedding to go to and you ask the local dry cleaner nicely. It’s like you don’t pay the same dollar as everyone else for the service.
Imagine you’re told that things will get better, yet still those dry cleaners remark on your pleats as you walk down the street, as if just being on the street were an issue. Maybe white people, while being grilled, you see black people walking by – the status of the lining of their smart fall coats unchallenged.
I know you would get angry, white people.
...and maybe black people would then say, “If you weren’t out on the dirty streets, you wouldn’t need a dry cleaner, but there you are, making trouble.”
Some white guys would tip a Volvo during one of these protests, as if their team lost the Cup.
Perhaps that car lit on fire would be virtually all that got reported. A car burning in the street unattended for three hours sparks more network hand-wringing than a black boy’s body left for four.
“Look at all that grey smoke,” non-white pundits would say, gravely. “The dry-cleaning bill is going to be huge.”

UPDATE: The outrage in the Comments is telling, isn't it.
Posted by Cathie from Canada at Sunday, November 30, 2014 No comments:

#BlackLivesMatter but not in #ferguson

The failure to indict Darren Wilson is a travesty. 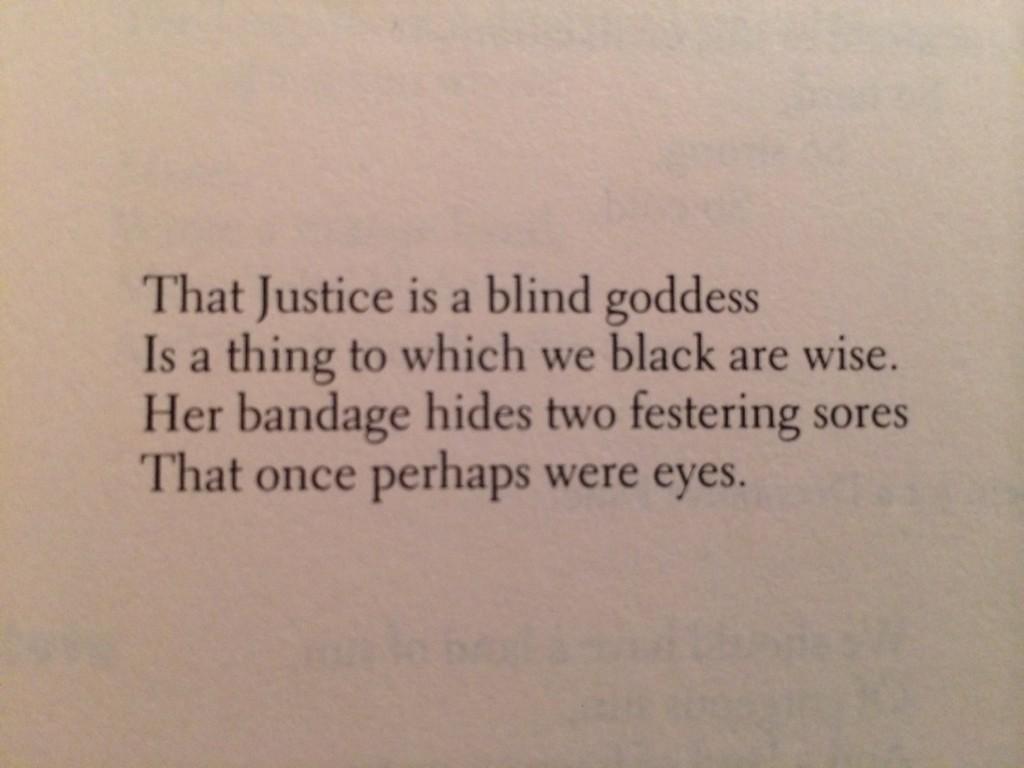 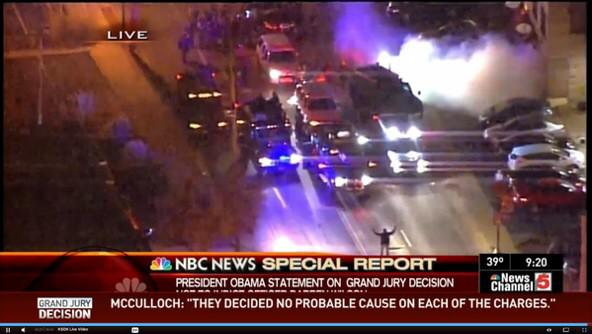 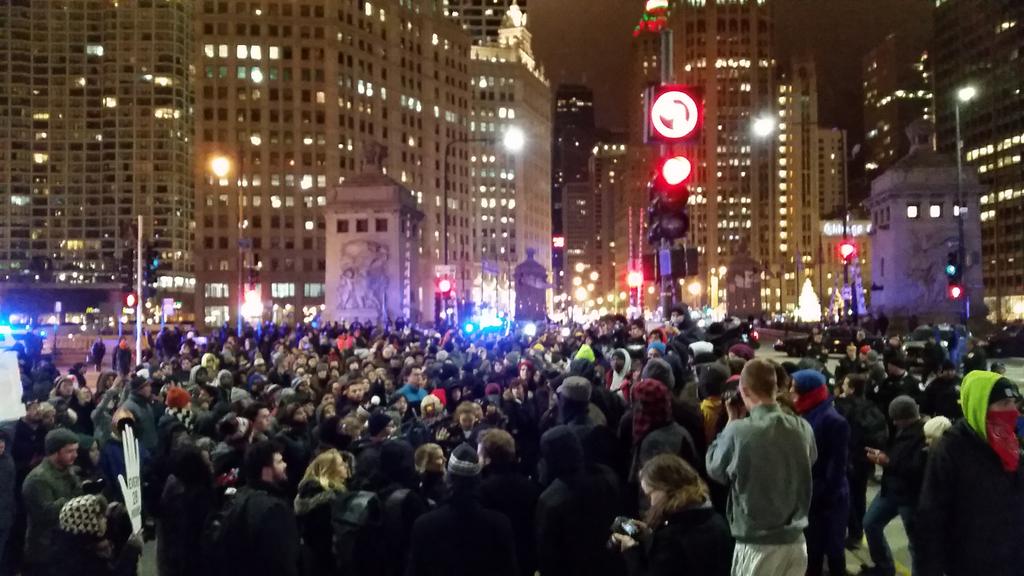 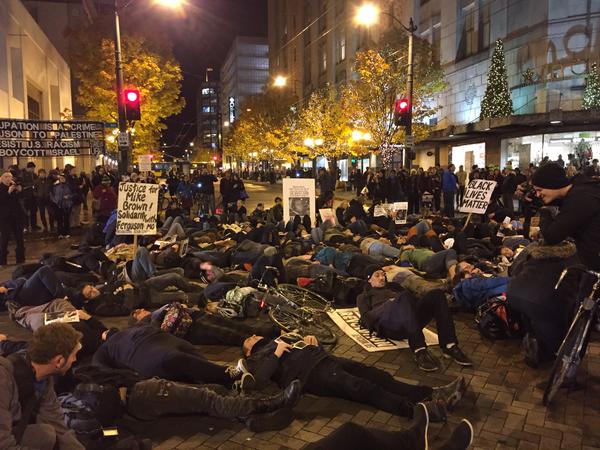 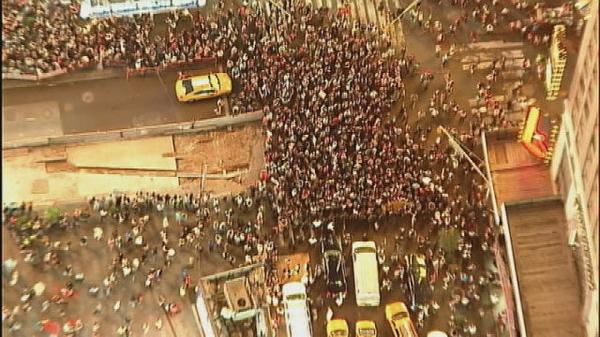 And in Toronto tomorrow
Posted by Cathie from Canada at Tuesday, November 25, 2014 No comments:

So it has been revealed that Veterans Affairs had $1.1 billion dollars in unused funding over seven years. Now Veterans Affairs minister Julian Fantino is claiming that the Harper Con's "balanced" budgets where not achieved at the expense of our veterans. He is minister-splaining the government budget to us ignorant plebs:


Fantino said claims that the unused funds were a strategy to balance the budget are false.
"The funding is allocated and if it's not spent it's recycled back into continuing programs and services for veterans. It's not lost money," said Fantino.
He called it a technical budget process that does not hamper services and programs for veterans.
"If I can put it bluntly, this is a technical kind of to and fro in the budgeting process of government," he said.

Oh, sure, that makes sense.  And those flying pigs over there are actually F-35s.
Posted by Cathie from Canada at Sunday, November 23, 2014 No comments:

Decision day in Ferguson will be Monday at the earliest | Toronto Star:

“We’re living under a governor’s declared State of Emergency, we’re facing school closures, and we’ve got enough extra law enforcement here to make us all feel like enemies in our own country. And all over a process that should have been decided months ago.”


Is there anyone, anywhere, who thinks that Darren Wilson will be indicted?
Posted by Cathie from Canada at Saturday, November 22, 2014 No comments:

Just a note that I'm sorry for my silence this month.
Some family stuff is keeping me busy, but also I am being distracted by technology -- I now have a little tablet computer and I find I am using it more often during the day to check email and surf the web, and it is not set up to let me also do blockquotes and blog posts, etc.

Posted by Cathie from Canada at Friday, November 14, 2014 No comments:

In my previous job, I was involved in dealing with accusations of misconduct. One of the basic principles of procedural fairness is that accusations cannot be taken seriously if they are anonymous. An accuser has to be willing to come forward before the charge can be dealt with and accused can be required to answer to it.
Imagine if your career could be ruined by an anonymous charge of assault, and you were not permitted to know who made the accusation or where the accusation had come from?
That's a kangaroo court.
So Trudeau was informed about the misconduct charges against two Liberal MPs late last week, then he acted immediately to suspend them.
And now Mulcair and NDP whip Turmel are "shocked" that Trudeau "went public" against the wishes of the alleged victims?
Was Trudeau supposed to just keep quiet and do nothing?
Is that what the NDP would have done?
Is that what they did?
Posted by Cathie from Canada at Thursday, November 06, 2014 No comments: