Get on with it!


Liberal MP Bill Blair wants to make it clear the growth and sale of legal marijuana in Canada will not be a free-for-all.

Bill, its already a free-for-all -- anyone can already get anything they want,any time they want.
So the only question is who will be selling it, the provincial Liquor Board Store or that gang guy on the corner.
And Trudeau could not have picked a worse "point person" to develop a legalization strategy for Canada than Bill Blair -- the guy who couldn't manage his own police force.
Posted by Cathie from Canada at Wednesday, January 13, 2016 No comments:

I though Conservatives were against government interference?

UPDATE:  A commenter points out that McKenna is a Liberal, not a Conservative -- sorry, I had mis-read a website.  So I have updated my post accordingly, but I didn't withdraw it because I think the overall point is still valid.

Conservative politician Frank McKenna thinks immigrants should be required to live in the Maritimes when they first come to Canada.
Now let me say first that living in the Annapolis Valley in the spring could be pretty nice, really, especially compared to Whitehorse in the winter.
But I always thought it was Conservatives Liberals who believed that governments shouldn't be telling people what to do -- like with owning rifles and selling wheat.
I guess that was then and this is now.
Apparently Nova Scotia and New Brunswick think maybe McKenna has a good idea. And it starts out sounding sort of innocuous really:


He said the federal government should create a special program for Atlantic Canada that would require immigrants to live three to five years in the region before they are granted citizenship... He said forcing a Canadian citizen to live in a particular province would violate their mobility rights under the Constitution, but he said Constitutional scholars believe it would be a reasonable requirement for people seeking citizenship.

But my question is, just how, exactly, do they think this "special program" should be enforced?
Will we have to set up an "immigrant location" board, just like we have a parole board, to keep track of where people are living and whether they have completed their sentence -- um, location term?  Would they have to show up with their families in tow every two weeks or every month to "check in"?  And if they missed a check-in, then would we send out the IMLOs -- immigrant location officers -- who would raid the neighbours to search out where the family had moved to. And there would be "underground railways" to Toronto and Vancouver, so that immigrants could be shuffled around the country.
And then when we find them, we would have to move them back to the Maritimes so they could finish their sentence -- um, "location term".  But likely they couldn't be trusted not to run away again so then would be have to set up special "camps" for them to live in -- you know, with big signs at the entrance about how work will make you free... 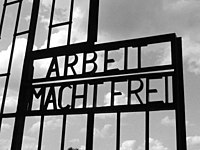 What a cruel, mean and ignorant thing for Brad Wall to say

“If you really don’t like the prison food, there’s one way to avoid it, and that’s don’t go to prison."

This is what Saskatchewan premier Brad Wall said in response to complaints about poor jail food quality and quantity after the government's decision to contract out prison food to a for-profit company, Compass Group -- which is also in the news today for sexual favours.
Stay classy, Brad!

Posted by Cathie from Canada at Saturday, January 09, 2016 No comments: