Great tweets of the day: laugh and the world laughs with you

Well, I guess there's nothing to do today really except laugh, so here goes:

I’m on the edge of my seat! pic.twitter.com/tn2MbABmZe
— Gillian OShaughnessy (@GillOshaughness) January 31, 2020

this is ringo, i think that it's safe to say that he likes to swim
(ringo.swims.alot IG) pic.twitter.com/yVwRUzlAVd
— Humor And Animals (@humorandanimals) January 29, 2020

When you're trying to end an argument, but your bird won't let you. 🔊
(🎥: Imgur user MrPuckett) pic.twitter.com/KXYTv3Olq3
— Clare Logan (@withchillies) January 19, 2020

Posted by Cathie from Canada at Friday, January 31, 2020 No comments:


Darkest Hour was on, so I was able to watch this great scene again today:

Then out spake brave Horatius,The Captain of the gate:“To every man upon this earthDeath cometh soon or late.And how can man die betterThan facing fearful oddsFor the ashes of his fathersAnd the temples of his gods."
Posted by Cathie from Canada at Thursday, January 23, 2020 No comments:

Here's some tweets that I have been enjoying today:

No matter the size, cats will be cats😂 pic.twitter.com/EXaVWGNGaa
— Akki (@akkitwts) January 16, 2020

Posted by Cathie from Canada at Wednesday, January 22, 2020 No comments:

I for one welcome our new Sussex Royal overlords

Many Canadians are giddy at the prospect that Prince Harry and Meghan Markle could be moving to Canada, injecting some razzle dazzle to the sprawling, bone-chillingly cold country. https://t.co/3HH575a6EK
— New York Times World (@nytimesworld) January 11, 2020

Well, I'm not exactly giddy, but I am excited.  I think it will be great if Harry and Meghan and little Archie moved to Canada.

Their webpage is beautiful, very well done, and explains their overall intentions.

Full Disclosure: I did meet the Queen once, when I was a reporter at a Victoria newspaper and I got to cover a Royal Visit there. And I attended a press reception on the Royal Yacht Britannia - which sort of dates me, doesn't it, since the yacht has been decommissioned for 20 years.
Anyway, getting back to today's news, I notice Canadian twitter is combining some pro-monarchy enthusiasm with some bitching about how expensive it would be for Canada to pay for RCMP protection.


For decades, if not a century+, Canada has provided protection for eminent persons visiting Canada. Ex-US Presidents, European royalty, etc. The political right either has amnesia or thinks Harry and Meghan are a great distraction from their boring leadership contest. #cdnpoli
— Diane Marie (@DianeMariePosts) January 13, 2020

Though actually, I think most of the "Canada is furious!" coverage is coming from the same British tabs that drove the Sussex Royals out in the first place, so they don't have any credibility when they write about how angry we supposedly are.
My feeling is, we already pay for RCMP protection for a lot of other ceremonial positions -- the Governor General and all the Lieutenant-Governors, not to mention the Canadian Senate - so what's another Royal Highness or two between friends. I expect the Canadian government will work out a deal with the Brits sooner rather than later on this. Isn't Mark Carney still running the Bank of England? Maybe he can cut us a cheque.
The thing that is really making me laugh is how angry the racist British tabloids are now about losing Megan as their target of bile -- they're already ramping up the criticism of William and Kate, but their hearts aren't really in it. They really loved bashing every single thing that Meghan did or didn't do. and they were salivating to start in on Archie as soon as they could start comparing him to angelic George and winsome Charlotte and adorable Louis.
Seeing how bad their Meghan-as-Monster coverage was, its no wonder Harry was furious - and the rest of the family should have spoken up in Meghan's defense much louder and more vigorously - I suspect they other royals thought mere dignity would eventually deflect them (a mistake Trump opponents make all the time, too) or they were secretly relieved that she was the target rather than them. They could have demanded changes to that Royal Rota system years ago.
Now, the next time the Raptors are in the NBA finals, I suspect Harry will be joining Obama at the arena. Won't that be fun?
But leave it to The Beaverton to have the last word:

Update: Here's a good one too:

I like the fact that marrying a hard working black woman gave Harry the stones to get off the dole and work.
— Blahblah, something holiday, Cipher (@snarkylicious) January 8, 2020

Posted by Cathie from Canada at Tuesday, January 14, 2020 No comments:

We were talking yesterday about the possibility of a US-Iran war and how we are experiencing misty, water-coloured memories of the awful build-up to the invasion of Iraq way back in 2003, when related scare-mongering about Iran was also going on.
One of the things I remembered most clearly from that time was this old column from I, Cringely: The Pulpit, written by a journalist called Mark Stephens under the pseudonomyn Robert X. Cringely.
I have never forgotten it so I looked it up last night on the Wayback Machine. The article was nominally about the 2004 reelection of Bush, but it also featured Stephen's description of a 1986 incident in the eight-year Iran-Iraq War and what this incident taught him about how Iran and America would compare in "moral" determination:

If the experts are correct, the 2004 election results mean we now live in a country where morality is apparently the major concern of people. Am I wrong, or is the same thing not true in Iran? And if our morality is in fundamental conflict with their morality, which side will be willing to sacrifice more to obtain what they view as their just end? I can tell you it ain't us.
Back in 1986 I talked Penthouse magazine into giving me an assignment to write the story: "How to Get a Date in Revolutionary Iran." The premise was that hormones are hormones, and those wacky kids in Tehran, most of whom could still remember the Shah, had to be finding some way to meet members of the opposite sex. So I headed off to Iran to find out the truth. If you are interested in such stuff, the only time a single man and woman not from the same family could be together in private back then was in a taxi (he being the driver), so all the teenage boys who had or could borrow cars turned them into taxis. This, of course, put all the power in the hands of the woman since she could see him but he had to take pot luck.
I eventually finished the piece and decided to go see the war since I had been in Beirut and Angola, but had never seen trench warfare, which is what I was told they had going in Iran. So I took a taxi to the front, introduced myself to the local commander, who had gone, as I recall, to Iowa State, and spent a couple days waiting for the impending human wave attack. That attack was to be conducted primarily with 11-and 12-year-old boys as troops, nearly all of them unarmed. There were several thousand kids and their job was to rise out of the trench, praising Allah, run across No Man's Land, be killed by the Iraqi machine gunners, then go directly to Paradise, do not pass GO, do not collect 200 dinars. And that's exactly what happened in a battle lasting less than 10 minutes. None of the kids fired a shot or made it all the way to the other side. And when I asked the purpose of this exercise, I was told it was to demoralize the cowardly Iraqi soldiers.
It was the most horrific event I have ever seen, and I once covered a cholera epidemic in Bangladesh that killed 40,000 people.
Waiting those two nights for the attack was surreal. Some kids acted as though nothing was wrong while others cried and puked. But when the time came to praise Allah and enter Paradise, not a single boy tried to stay behind.
Now put this in a current context. What effective limit is there to the number of Islamic kids willing to blow themselves to bits? There is no limit, which means that a Bush Doctrine can't really stand in that part of the world. But of course President Bush, who may think he pulled the switch on a couple hundred Death Row inmates in Texas, has probably never seen a combat death. He doesn't get it and he'll proudly NEVER get it.
Welcome to the New Morality.

I don't think Trump "gets it" either, and he knows even less about war and death than National Guard pilot Bush did.
I believe the only reason Trump is threatening war with Iran right now is his fear of impeachment and his belief that a Republican senate would never vote to remove a "war president".
He's likely right.  So I think the world can only hope that the impeachment trial in the Senate moves quickly enough to change Trump's calculations - in the unlikely event that the Senate vote actually removes Trump from office, its a new game. And in the more-likely scenario of non-conviction, then Trump will just go golfing and war with Iran will be cancelled.

Posted by Cathie from Canada at Monday, January 06, 2020 No comments:

Today is Twelfth Night AKA Epiphany Eve.
Here is one classic version:

And another much earlier classic too:
The director, Wendy Toye, was one of the few female film directors in the 1950s (or in any decade, for that matter).
Posted by Cathie from Canada at Sunday, January 05, 2020 No comments:

Its the Year of the Optometrist!

People around the world are celebrating 2020 - which my husband calls The Year of the Optometrist. 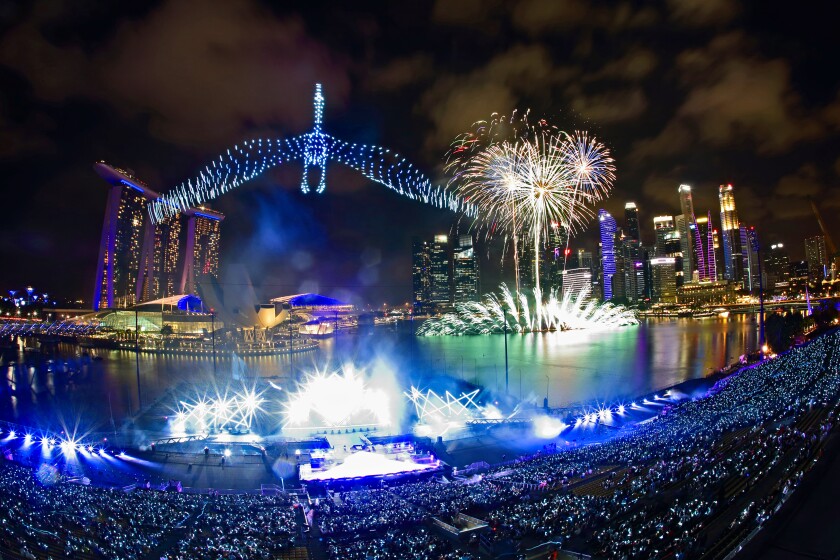 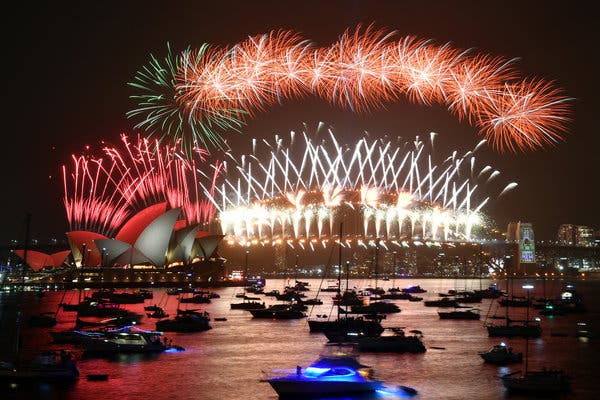 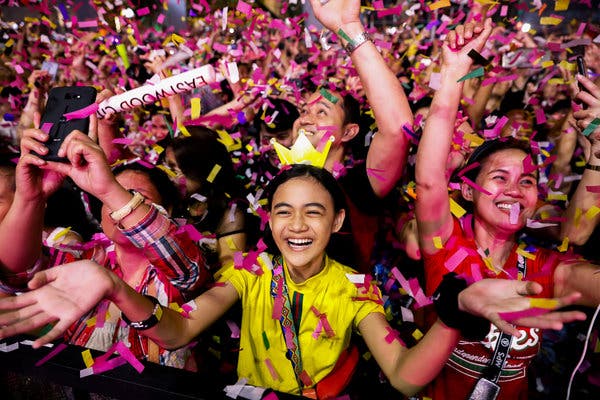 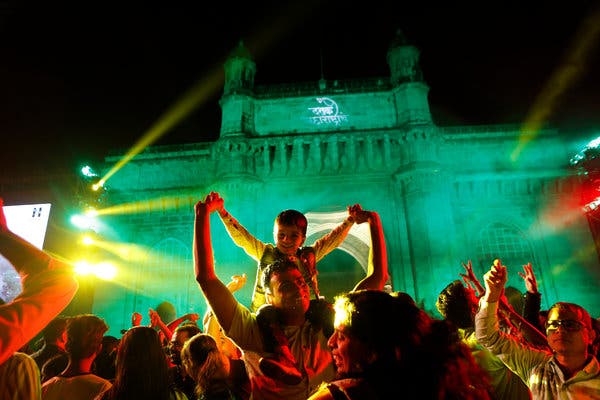 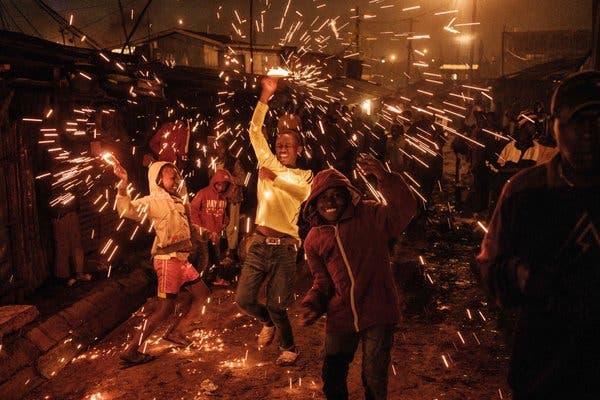 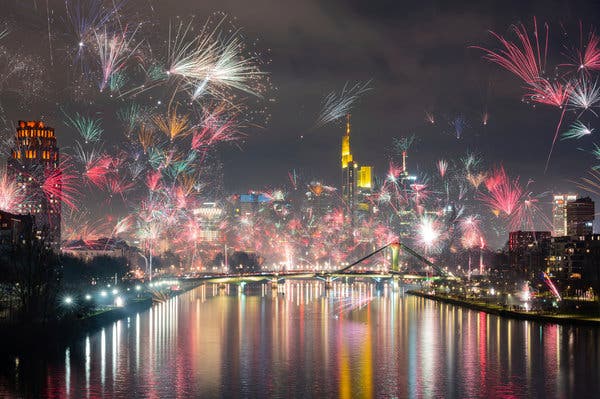 Photos from the New York Times. 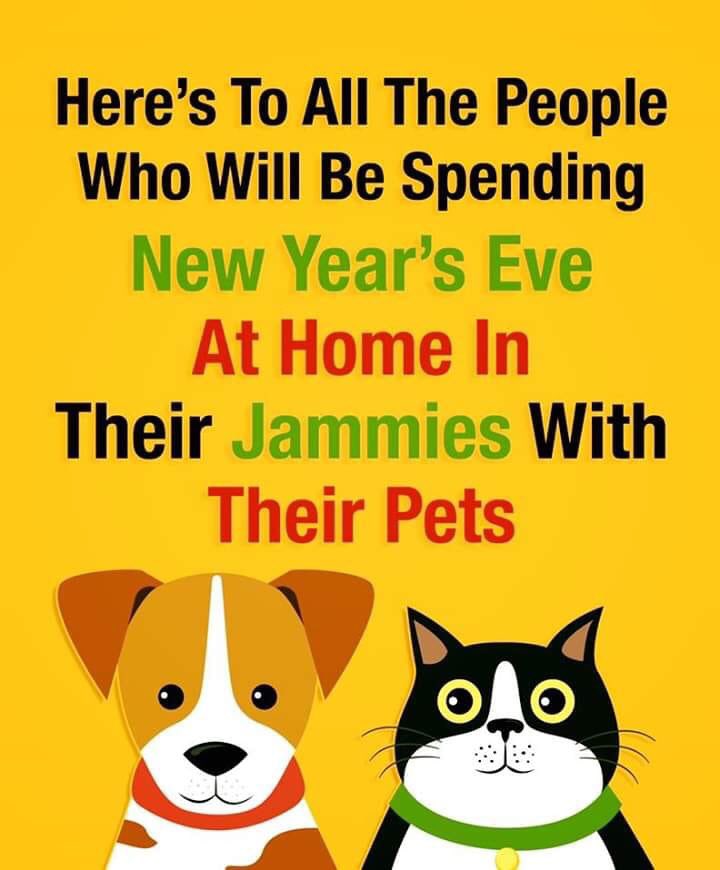 dude if we aren’t bartering dried beans and ammo with the last person who remembers how to make antibiotics in a year let’s call it a win
— Mass for Shut-ins (is a podcast) (@edburmila) December 31, 2019

Posted by Cathie from Canada at Wednesday, January 01, 2020 No comments: