What happened on 1/6, and what will happen next

Here's a map I found that illustrates the Jan 6 Trump Insurrection: 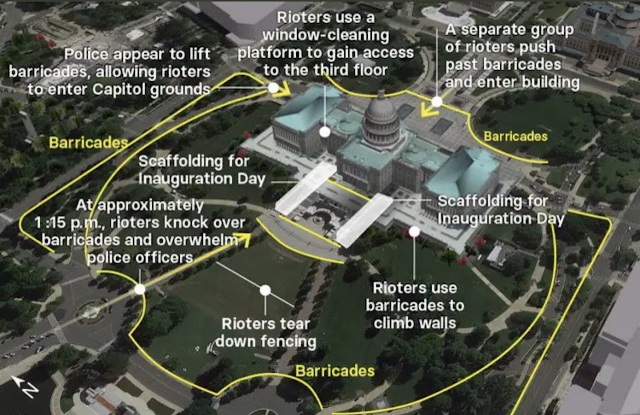 The New York Times has an excellent interactive article which describes how the attack on the US Capital building went, and here's an article from the Washington Post describing what Washington police went through that day:

These police leaders talked of battles using metaphors typically reserved for wars, describing fighting on three fronts, including the West Terrace, one of the few places where police prevented rioters from breaking through. Had those rioters succeeded, authorities said, thousands more people could have poured into the Capitol, with possible catastrophic consequences. Nearly 60 D.C. police officers and an unknown number of Capitol officers were hurt in the siege, with injuries that included bruised and sprained limbs, concussions and irritated lungs.

Here are Twitter threads which describe what happened at the Trump Insurrection on Jan 6, 2021, and why it happened, and who likely planned it.
First, how it was planned:

On January 6, armed Trumpist militias will be rallying in DC, at Trump's orders. It's highly likely that they'll try to storm the Capitol after it certifies Joe Biden's win. I don't think this has sunk in yet.

(THREAD) Over the past week, this feed has compiled over 250 major-media reports about the January 6 insurrection Trump incited. Evidence of a four-pronged seditious conspiracy has emerged. I summarize this evidence—all previously posted—here. I hope you will read on and RETWEET. pic.twitter.com/oSFZLbycln

Second, the day itself;

In regards to the #CapitolCoup, I’m in a unique position. I monitored forums ahead of time and then was present for the coup itself.

These are my observations based on what I saw and the evidence that’s been collected so far. I reserve the right to adjust my analysis as needed.

Officer Eugene Goodman insulted and poked the Capitol building terrorists, so they’d chase him instead of entering the Senate chamber. He’s Black and he did this knowing they were white supremacists. Made himself live bait. He deserves all the awards:

Okay so the President incited an attack on Congress and it would've killed a bunch of members except:
* there are some seriously tough and clever capitol police officers
* a Rep happened to know the JCoS Chairman
* an aide knew a guy who used to work with the FBI Deputy Director https://t.co/LZFTgnyQpd pic.twitter.com/TDmO2U98fe

And third, what is next:

My thoughts on the coming days and months. We're paying too much attention to an unlikely repeat of 6 January, and not enough to the broader, ongoing threat of radicalized MAGA-inspired violence and terror. https://t.co/UKVJCY76Si

Posted by Cathie from Canada at Thursday, January 14, 2021