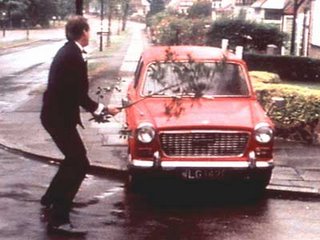 "Right! That's it! You've tried it on just once too often! Right! Well, don't say I haven't warned you! I've laid it on the line to you time and time again! Right! Well...this is it! I'm going to give you a damn good thrashing!" -- Basil thrashing his car with a tree branch when it won't start.
Now comes the news that many of us talk to our cars. Reuters reports on a British survey:

Nearly half of motorists regularly talk to their cars, giving words of encouragement ahead of a long trip and lavishing praise for a job well done at journey's end, according to research on Monday. A survey of 2,000 owners also found 40 percent thought their car had a personality and was capable of being upset whilst 19 percent worried about how their car was feeling.
The poll, conducted by organisers of July's British International Motor Show found women rather than men tended to have a close relationship with their car. Giving a pet name to their car but not their human partners was admitted to by 20 percent of women...

What they didn't survey was how many of us talk to other drivers -- I'll bet its just about everybody, and thank heavens those idiots cannot hear us insult them.
There is one thing that we all share, and that is the inner conviction that each of us has -- "I am an above-average driver".
My kids learned to swear by listening to me behind the wheel, though of course I always blamed it on their friends.

Great line of the day
Olympics
Deeply sorry
Great lines of the day
Hearts and minds
Play ball!
An idea whose time has come
Who does Ezra Levant think he is?
Disappearing act
Oooh, smart move, guys!
Tweets by CathieCanada