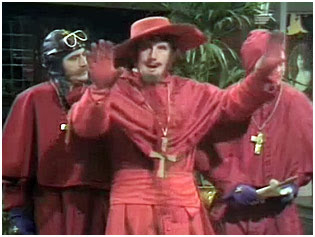 The hallmark of the Bush administration is its blundering approach to international affairs, an elephant swinging through a china shop and then wondering why things are getting broken.
And its catch phrase is "Nobody expected..." . Like 14-year-olds, the Bushies don't think they are subject to the normal rules of cause and effect, so the reasons for adverse events must be mysterious and unfathomable. In Bush World, nobody expected Bin Laden would attack the US and nobody expected planes to be used to fly into buildings and nobody expected that North Korea would develop nuclear weapons and nobody expected that Saddam didn't have any weapons and nobody expected Iraq to fight back and nobody expected Hezbollah to prevail in Lebannon and nobody expected Hamas to win the Palestinian elections -- even though some knowledgeable people did expect exactly these things, only the Bush administration was determined not to listen to them, its fingers stuck into its ears saying nah-nah-nah-nah.
And wait for it, within a few days we'll hear Condi say that "nobody expected" Bhutto to be assassinated....
As outlined in this Washington Post article, it was the US government who decided that Bhutto should return to Pakistan to be "elected" as their Prime Minister, so that Musharraf could stay on as President, so they could both run the country together and maintain its pro-US tilt -- even though Bhutto and Musharraf hated each other. But somehow, in some mystical and unknowable way, this odd couple was going to create stability in Pakistan, and it was all going to work out just fine because that's the way the Bush administration wanted it to work and it had all these diplomats and statesmen buzzing hither and thither around the world setting up meetings and working out deals and negotiating agreements.
So of course it can't be the Bush administration's fault that Bhutto got assassinated, oh no:

Xenia Dormandy, former National Security Council expert on South Asia now at Harvard University's Belfer Center, said U.S. meddling is not to blame for Bhutto's death. "It is very clear the United States encouraged" an agreement, she said, "but U.S. policy is in no way responsible for what happened. I don't think we could have played it differently."

Nobody expects the Spanish Inquisition!