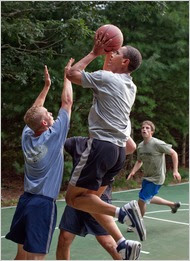 Progressive blogs have demanded for years that right-wingers apologize for supporting George Bush. I wonder whether some progressive bloggers themselves will ever apologize for not supporting Barak Obama.?
There seems to be a knee-jerk anti-Obama reaction going on in some circles, progressive as well as right-wing.
The anti-Obama progressives try to justify their attitude by saying how they would still like him if it wasn't for this, that or the other, but it actually doesn't matter what he does, its never good enough -- Andrew Sullivan slams Obama for what he didn't say when he signed into law an historic hate crime bill, Jane Hamsher thinks Obama is just pretending to support health care reform while secretly plotting with Joe Lieberman to sabotage it.
As John Cole writes:

I seriously am to the point that every time I open memeorandum or check the progressive blogs, I’m beginning to see the same kind of batshit crazy I see on right wing blogs. Has every one just lost their damned minds? Did everyone go insane?

There are two things at the root of it, I think.
First, when it comes to their internal picture of a president, too many Americans want a President who they can think of as “Daddy” or “Grandpa” or “General” -- older and hefty and white -- and they are angry at Obama because none of these labels fits him. How dare he be president when he doesn't look like one? Clinton and Kennedy endured the same reaction.
But second, add to this that Obama is African-American.
In the unexamined, even unconscious, worldview of some Americans, a young slim black man is certainly not someone to be respected or listened to or deferred to. Their inner Pat Buchanan is scared of black people. Obama even plays basketball just like those juvenile delinquent gang banger inner city black kids. How dare he be president when he's so scary?
Americans who secretly feel this way will continue to figure out some way to blame Obama for their feelings, because its just too uncomfortable and difficult to examine and discard their own prejudices.

Back to the future
Great line of the day
Waiting for another shoe to drop
Cheney as Dracula
Peeking through the curtains?
Shorter
What about Saskatchewan?
Just like good old whats-his-name
Memo to Joe Torre
Hmmm...
Tweets by CathieCanada