But they wouldn't have been kidnapped in the first place... 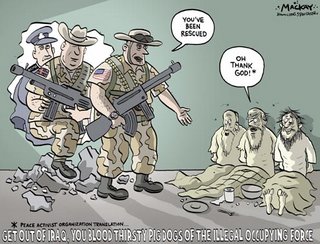 This is the cartoon from today's Star Phoenix -- it tries to make some kind of point about how the Christian Peacekeepers want the "bloocthirsty pig dogs of the illegal occupying force" to leave Iraq even though it was the military which rescued them from kidnappers. Ho, ho, ho-- those ungrateful lefties, they're learned their lesson now, blah, blah, blah.
The stupid thing about it is this:
the four Peacemakers would not have been in Iraq, and would not have been kidnapped, if the American military hadn't been there first.