The future of Iraq? Here's what Juan Cole thinks

Juan Cole draws a scenario for Iraq -- oil at $500 a barrel, Iraq split in three, the Kurds at war with Turkey and Iran, the Shiites and AlQuaeda at war on several borders and with Israel, and major conflicts at the Straits of Hormuz and in Saudi Arabia.
In the Comments to his post, Cole says "It is exaggerated for effect, and intended to show the worst-case end point of current policies." 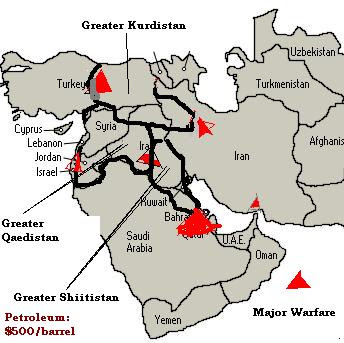 Save this and lets see what happens.
What concerns me now is this -- what could STOP this scenario from happening? The United Nations? The Arab League?

Snakes on a Plane
What a stupid idea
The first three weeks of the war with Iran
The "Stick It!" Speech
NOW I get it
To kill a mockingbird
Great lines of the day
Censure woes
Accident update
Just give him time
Tweets by CathieCanada