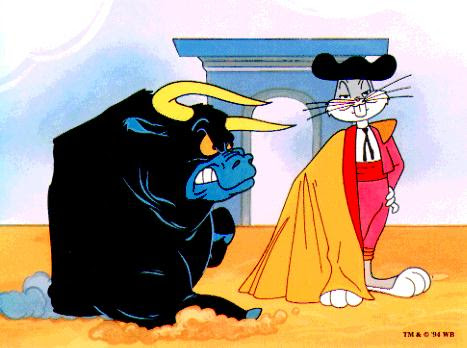 Will anyone hear the sound of one right wing flapping?

Fox News Channel might air two episodes of a "Daily Show"-like program with a decidedly nonliberal bent on Saturday nights in late January, with the possibility that it could become a weekly show.
The half-hour show would take aim at what executive producer Joel Surnow, the co-creator of "24," calls "the sacred cows of the left" that don't get made as much fun of by other comedy shows.

Well, its pretty difficult to make jokes about dying without health insurance, but have at it, guys. People used to laugh at Amos and Andy, too.
But when I read this story, what I thought of was Mel Blanc's famous anecdote about how Bully for Bugs got made -- maybe it was the "sacred cow" reference that brought this to mind.

According to Chuck Jones, the idea for this cartoon came about one day while he and the writers were trying to come up with a new story for a Bugs cartoon. The producer in charge admonished them, "I don't want no gags about bullfights. Bullfights aren't funny". The thought of putting Bugs in a bullfight hadn't even occurred to Jones, who immediately hit upon it as a great idea, and this resulting cartoon proved to be of the most successful in the Bugs Bunny series.

So maybe somebody at Fox can make Not Having Health Insurance funny. But I don't think Fox News would put up with anyone as subversive as Chuck Jones was.