So today John Bolton says that starting an illegal preemptive war of choice against Iran "is really the most prudent thing to do" and it would teach the Iranians a lesson.
I'll just bet it would.
As Josh Marshall says, just another example of John Bolton's keen strategic thinking. In Bolton's world, bombs apparently don't deliver ordinance or death anymore, they just deliver messages.
So, of course, does the phone. And without causing any pictures like this: 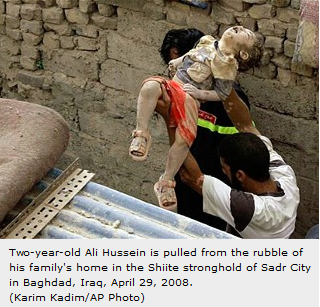 Iran is pretty direct about sending its own war messages, thank you very much. Like the message in this Robert X. Cringely story:

. . [while in Teheran in 1986 for another story, Cringely] decided to go see the [Iraq-Iran] war since I had been in Beirut and Angola, but had never seen trench warfare, which is what I was told they had going in Iran. So I took a taxi to the front, introduced myself to the local commander, who had gone, as I recall, to Iowa State, and spent a couple days waiting for the impending human wave attack. That attack was to be conducted primarily with 11-and 12-year-old boys as troops, nearly all of them unarmed. There were several thousand kids and their job was to rise out of the trench, praising Allah, run across No Man's Land, be killed by the Iraqi machine gunners, then go directly to Paradise, do not pass GO, do not collect 200 dinars. And that's exactly what happened in a battle lasting less than 10 minutes. None of the kids fired a shot or made it all the way to the other side. And when I asked the purpose of this exercise, I was told it was to demoralize the cowardly Iraqi soldiers.
It was the most horrific event I have ever seen, and I once covered a cholera epidemic in Bangladesh that killed 40,000 people.
Waiting those two nights for the attack was surreal. Some kids acted as though nothing was wrong while others cried and puked. But when the time came to praise Allah and enter Paradise, not a single boy tried to stay behind.
Now put this in a current context. What effective limit is there to the number of Islamic kids willing to blow themselves to bits? There is no limit, which means that a Bush Doctrine can't really stand in that part of the world.

And Bolton thinks they'll get all fluttery about a US bombing raid?
I don't know how badly the Iraqi soldiers were demoralized after this incident -- the Iran-Iraq war continued another three years and Saddam didn't care -- but I can't believe that most soldiers wouldn't be completely devastated at being told to make war on children.
Oh...yeah...

Today's Nelson Moment
You know what's going to happen next
It's not a bug, it's a feature
Great line of the day
First of the season
Obama supporters are creeping me out
Sam I am
Arrogant and cruel
I hadn't thought of it this way before
Greasing the skids
Tweets by CathieCanada