The speech-warriors explain it all away 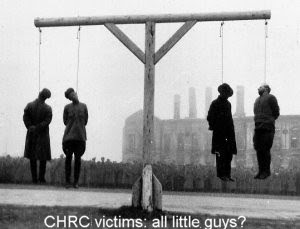 How on earth did the Canadian Human Rights Commission come to refuse even to hear the complaint against Maclean's magazine? It couldn't be that it simply judged the complaint to have no merit. Other forces had to have been at work. In the speech-warriors' own words:

Given the heat the Human Rights Commission has been taking I'd expect them to back off on the high profile cases. That way they can concentrate on the little guy that can't afford heavy duty legal counsel and doesn't have the resources to fight back.

The CHRC can retrench, and return to its bread-and-butter business of destroying little people.

So they blinked. Against everything in their DNA, they let Maclean's go. That's the first smart thing they've done; because the sooner they can get the public scrutiny to go away, the sooner they can go about prosecuting their less well-heeled targets, people who can't afford Canada's best lawyers and command the attention and affection of the country's literati.

Even with Taylor rules the mere threat of a CHRC complaint, not to mention the CHRC investigator’s rule-free techniques, put an ongoing chill on political conversation in Canada. The overbreadth of s. 13 means that for less well heeled respondents, the CHRC remains a real threat.

It seems the HRC is playing pure politics -- hammer the little guys but avoid the big players who could do it some injury.

Good grief, do these people have regular teleconferences, or what?

So here are some of the "big guys" that the CHRC has cravenly refused to send to a Tribunal...oh, wait, they did, and then the Tribunal settled the complaints:

Oh, and the dread State:

Attorney General of Canada (Applicant) v. Public Service Alliance of Canada and Canadian Human Rights Commission. [The CHRT findings on pay equity in the federal Public Service were eventually upheld. The Canadian government has to make good to the tune of $3 billion to current and former PSAC members.]

Now, don't give me any guff about these not being Section 13(1) cases. Either the CHRC is afraid to take on the big fish or it isn't. But not all the big fish meet the standard for a complaint against them to be heard. Maclean's was one of those latter fish. We've been saying so all along.

But why should we expect accuracy or honesty from the speech warriors? They're on a roll. In fact, at this point they're most likely in a fugue state, devastated by their recent win loss. These are the folks who brought you this:

Congratulations to CHCH TV out of Hamilton. They had me on a show today, along with a comedian, debating the decision by the B.C. Human Rights Tribunal to put a comedian on trial for unfunny jokes about lesbian hecklers.

(Umm...no, Ezra. Settle down. It wasn't off-colour jokes, but a tirade of homophobic abuse from a guy on-stage. It had nothing to do with his comedy routine.) 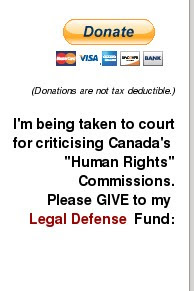 Umm...no, Kathy. You're being sued for defamation, because you publicly called a person a criminal.

And so the speech-warriors stagger into the dark night. Keep your eye out for the tell-tale flashes of heads exploding when the BCHRT, too, fails to uphold the complaint against Maclean's.

Posts we never finished reading
Change, we can believe in...
Releasing our inner Sweeney Todd
There but for the grace of God
Great line of the day
We're finally going to England!
Immortality
Giving birth is not a choice issue
Snakes in a .....
Oil? Perish the thought!
Tweets by CathieCanada