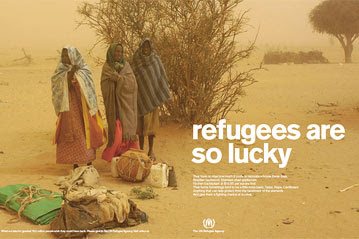 This is one of the ads made by the Toronto agency BBDO in 2007 on behalf of the UN Refugee Agency, with the goal of raising Canadian support for refugees.
Unfortunately, they didn't work too well on the Harper Cons, who still appear to think that refugees are the scum of the earth.  Now the Liberal's immigration critic Kevin Lamourex is blasting the Harper Cons and Jason Kenney for the failure of their refugee policies.
First, for their yahoo ideology:


"There was a great deal of suspicion that [denial of health care] was a decision that was made on the whim, that there was no real consultation, there was no real studies. We haven't seen that and we would like to see the evidence," he said at a news conference in Ottawa.
"Good government policy is made when you have evidence-based policy decisions and we haven't seen any evidence and we're calling for the minister to provide that," the critic said.

And second for just plain meanness:


Lamoureux was heavily critical of Kenney's performance as a minister and said that he chooses to "demonize" refugees, often by referring to them as "bogus." His language is insulting and inflammatory, according to the Liberals, and it sends a message that Canada is no longer a welcoming place for refugees.
"It's something that is very destructive, I believe, and the Liberal party is calling upon the minister to behave in a more ministerial manner and look at refugees as people that contribute immensely to our country," he said.

The government's own website gives us some valuable information about how successful many refugees have been in Canada and how much they contribute to the country.
I guess Kenny hasn't seen this yet or he would have ordered it taken down because it doesn't fit the party line.

Medal madness
Who's zoomin' who
Just you wait
Crabs got cars
Do they know something I don't?
Gag reflex
Minister Thug
Awesomely incorrect
First in our hearts
You can see for miles and miles
Tweets by CathieCanada