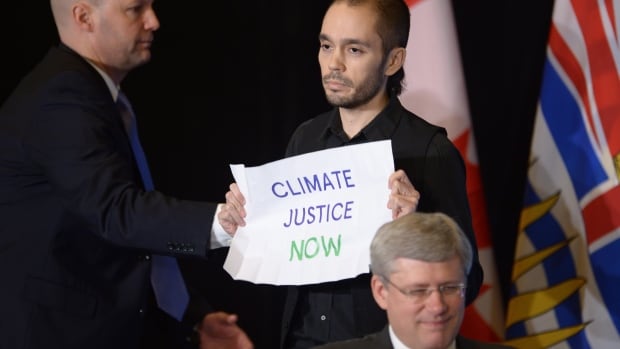 They wore aprons and sneaked behind Harper to hold up little paper signs.
The horror! The horror!
Now esteemed senator Bob Runciman thinks lèse-majesté is the crime of the century when Harper is the target.


Former Ontario solicitor general Bob Runciman is questioning why two activists who got to within an arm's-length of the prime minister this week were allowed to "walk away scot-free and smiling" — and he says he'll use his Senate seat to bring in new laws to deter similar future protests.
"People who sneak into these kinds of events, using phony ID, impersonate others, or conspire with others to do the same, should face indictable offences with serious fines and/or imprisonment," said Senator Runciman in a written statement sent to the parliamentary press gallery.

Posted by Cathie from Canada at Wednesday, January 08, 2014