Signs of the times

From Voices from the Frontlines of Protest, Washington D.C., a sampling of the protest signs in the Washington march this weekend:

Yeeha is not a foreign policy
Making a killing
Ex-Republican. Ask me why
Blind Faith in Bad Leadership is not Patriotism
Bush is a disaster!' (with the President's face in the eye of a hurricane)
He's a sick nut my Grandma says (with a photo of an old woman in blue with halo-like rays emanating from her)
Osama bin Forgotten
Cindy speaks for me
Make levees not war
W's the Devil, One Degree of Separation
Dick Cheney Eats Kittens (with a photo of five kittens)
Bush busy creating business for morticians worldwide
Liar, born liar, born-again liar
Dude -- There's a War Criminal in My White House!!!
Motivated moderates against Bush
Bored with Empire
Pro Whose Life?
War is Terrorism with a Bigger Budget.

And here is what some of the people said about the signs they carried and why they marched. I wasn't surprised at the references to Cindy Sheehan, but I was surprised at how many people made the Hurricane Katrina connection:
What if they gave a war and nobody came? [And on the back it says] What if they gave a hurricane and nobody came because they were all at war? "I was absolutely infuriated after the hurricane. All our resources were at war. There was nothing to help our people here." 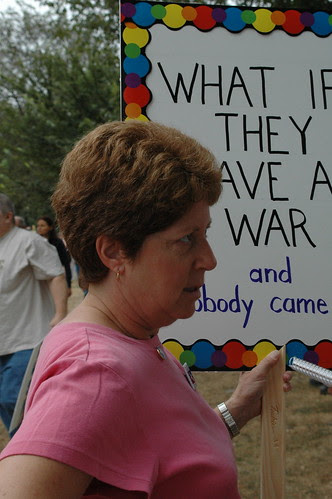 Not with my sons "Like Cindy Sheehan said, we have to get back to our humanity, and so we mothers have to begin to be teachers. We've lost our way." 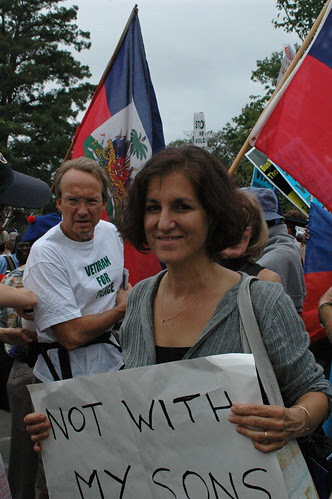 Sex is back in the White House. Bush is screwing us all! "I just think that the war in Iraq is a big mistake. Especially when I saw New Orleans and thought about the money for the levee system diverted to Iraq. That was upsetting. Even before that, though, I got the impression that the ones pushing the war were really planning for the best-case scenario, that they hadn't planned for anything but the best outcome. I think what they're doing is creating more terrorism." 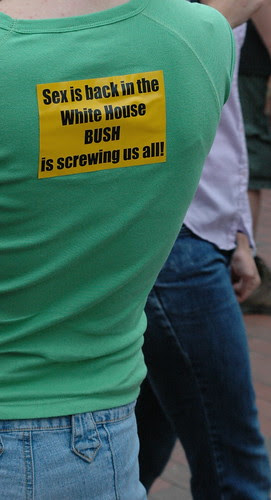 Bring the soldiers home [part of a campaign to hand out toy soldiers] "The other night in New York at a Cindy Sheehan event, we were handing these out and I gave a packet to one of the mothers there. She recoiled. She said, ‘My son's in Iraq. I can't take those. I used to hide them from him.' But you know what she said then? She said, ‘Keep going. But keep going!' People get very excited about putting them in places and then other people find them. The other day we got an email from a cop who had found one in the Federal Courthouse in New York and he was so moved he wrote us." 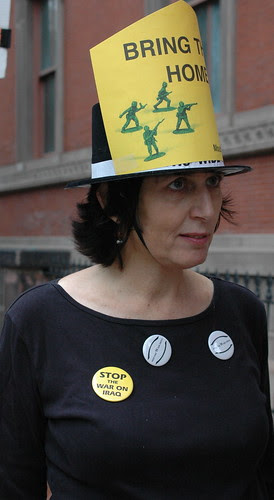 New Orleans Evacuees for Peace "All of our National Guard troops were off in Iraq instead of rescuing people here. Instead of being here to help out, they were off making problems in the rest of the world." 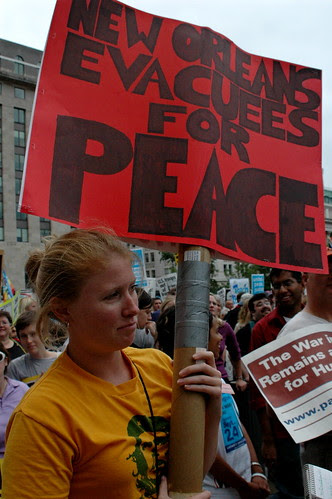 No Iraqis left me on a roof to die "I've been thinking and thinking, trying to figure out how to make my people understand the direct correlation of this war and our well-being and I just thought this put it succinctly." 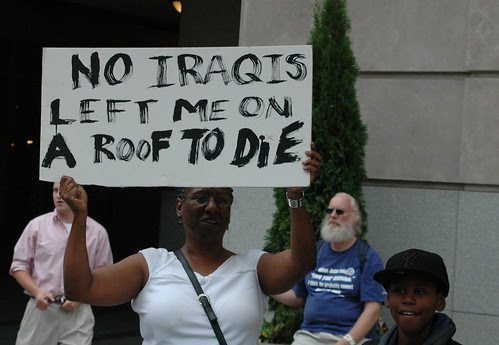