Those were the days

Does anyone remember the FLQ (Front de libération du Québec)?
I do.
With all the stories recently about the Mississauga terrorist wanna-be's, I thought I would look up the FLQ again. Maybe its because I was in my teens when they were most active, but I remember the FLQ as pretty scary.
Talk about your "home-grown terrorists", for my generation, this means the FLQ. They were the real thing.

Quebec student rally in support of the FLQ 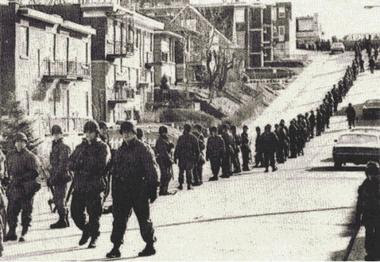 Police cordon at the surrender of Liberation cell, December 1970. 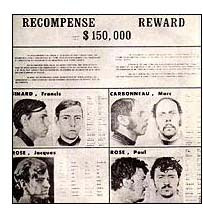 [Formed in 1963,] the group's declarations called for a Marxist insurrection, the overthrow of the Quebec government, the independence of Quebec from Canada and the establishment of a workers' society . . . Some of the members were organized and trained by Schoeters, a Belgian revolutionary and alleged KGB agent, whose hero was Che Guevara . . . At least two of the FLQ members had also received guerrilla training in selective assassination from Palestinian commandos in Jordan.
Various cells emerged over time: The Viger Cell, the Dieppe Cell, the Louis Riel Cell, the Nelson Cell, The Saint-Denis Cell, the Liberation Cell and the Chénier Cell . . . In 1966 a secret eight-page document titled Revolutionary Strategy and the Role of the Avant-Garde was prepared by the FLQ outlining its long term strategy of successive waves of robberies, violence, bombings and kidnappings, culminating in insurrection and revolution . . .
From 1963 to 1970, the FLQ committed over 200 violent political actions, including bombings, bank hold-ups and at least three deaths by FLQ bombs and two deaths by gunfire. In 1963, Gabriel Hudon and Raymond Villeneuve were sentenced to 12 years in prison for crimes against the state after their bomb killed Sgt. O'Neill, a watchman at Montreal's Canadian Army Recruitment Centre. By 1970, twenty-three members of the FLQ were in jail, including four convicted murderers, and one member had been killed by his own bomb. Targets included English owned businesses, banks, McGill University, Loyola College, and the homes of prominent English speakers in the wealthy Westmount area of the city. On February 13, 1969 the Front de libération du Québec set off a powerful bomb that ripped through the Montreal Stock Exchange causing massive destruction and seriously injuring twenty-seven people. . .

And here are some of the events of the October Crisis:

On October 5, 1970, members of the FLQ's Liberation cell kidnapped James Richard Cross, the British Trade Commissioner as he was leaving his home for work. Shortly afterwards, on October 10, the Chénier Cell kidnapped the Minister of Labour and Vice-Premier of Quebec, Pierre Laporte, while he was playing football with his family on his front lawn. On October 17, callers to a radio station announced that Laporte had been murdered and divulged the location of the map which led to the discovery of his body . . . Early in December 1970, police discovered the location of the kidnappers holding James Cross. His release was negotiated and on December 3, 1970, five of the terrorists were granted their request for safe passage to Cuba by the Government of Canada after approval by Fidel Castro.
In July 1980, police arrested and charged a sixth person in connection with the Cross kidnapping. Nigel Barry Hamer, a British radical socialist and FLQ sympathizer, pleaded guilty and was sentenced to 12 months in jail.
In late December, four weeks after the kidnappers of James Cross were found, Paul Rose and the kidnappers and murderers of Pierre Laporte were located in the corner of a country farmhouse basement. They were tried and convicted for kidnapping and murder.

And I hadn't remembered these much more recent events:

. . . terrorist activities continue to occur at the hands of isolated members of the organization. In 2001, Rhéal Mathieu, a member who in 1967 was sentenced to 9 years in prison for terrorist activities including murder, was convicted of the attempted firebombing of three Second Cup coffee shops in Montreal. Mathieu targeted Canada's largest specialty coffee retailer because of the company's use of its incorporated English name Second Cup. For this offence, a judge sentenced Rhéal Mathieu to one month in jail in addition to the nine months he had already been held. He was also given a six-month sentence to be served concurrently for illegal possession of a sawed-off shotgun and a .38-calibre revolver. Shortly thereafter, seven McDonald's restaurants were firebombed. According to a spokesman for the company, the bombings resulted in customers being afraid to go to Second Cup coffee shops, resulting in a substantial loss of business. The company changed their signs to Les cafés Second Cup.