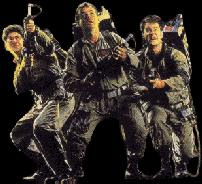 My favorite line from Ghostbusters is this one:

"Personally, I liked the university. They gave us money and facilities, we didn't have to produce anything! You've never been out of college! You don't know what it's like out there! I've worked in the private sector. They expect results!"

Which brings us to Rick Salutin's column this week, about expecting results:

I wish leaders such as Stephen Harper, George Bush and Tony Blair, who often say they “accept responsibility,” would get clear on what they are responsible for. They are responsible for the results of their actions, not whatever good intentions they have when they embark . . . This is not a point in abstract theory. The situation in Iraq is far worse now than it was before the invasion . . . That is what Tony Blair and George Bush are responsible for.
It seems to me this kind of sage awareness underlies the scepticism that many Canadians feel about our Afghan mission. They are worried about the results, not the motives. So when Lewis MacKenzie wrote in The Globe and Mail this week that the polls should ask, “Do you support letting the Taliban return to power” and “Do you support beheading teachers,” he misses the point. People are not questioning goals; they are evaluating the chances of getting there. . . . it looks too much like Iraq.

Emphasis mine.
And I want to add this observation: when Canadian politicians and military and the Queen's Own 101st Fighting Keyboarders (Canadian branch) undertake to trivialize and ridicule legimate war concerns and questions -- the "cut and run" fingerpointing terminology is one example, as is the "Do you support beheading teachers?" type of question (to which I would be sore tempted to reply, why of course!, but I digress) -- the more suspicious we will be that somebody doth protest too much, that someone is trying to pull a fast one, to sell us a bill of goods. And maybe then we would start to wonder if the Afghanistan mission is failing but that Canada's leaders are trying to pretend results don't matter as long as our hearts are true.

More of the same
Are Canadian soldiers still turning prisoners over...
Great line of the day
Open mouth
What a show it was
Yay, Barney!
Great lines of the day
The Culture of Victimization
I don't understand it
Say No To Torture! Digby is asking everyone to pos...
Tweets by CathieCanada