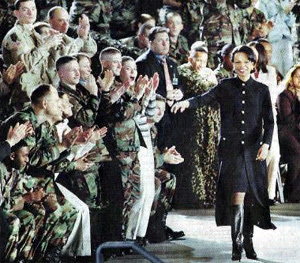 Remember this?
Glenn Greenwald calls neocon foreign policy the Abu Grahib Theory of Foreign Affairs. And yes, that is a useful construct in analyzing whether a foreign policy initiative actually makes sense or is just indulging a fantasy of power or submission.
But I think its actually more accurate to describe this with an S & M analogy.
When it comes to foreign "relations", the neocons appear to enjoy both the S and the M, the grovelling and the whipping -- wallowing in a mythology of American weakness, while indulging in Ilsa the She-Wolf fantasies of whipping the world into shape and bending all nations to her will.
Just look at the language we're always using to describe the Iraq war -- there's the "surge" in Iraq (which should, I think, be titled "Operation Big Swinging Dick" because that's whose idea it was and that's the idea of it.) Then there is the Bush administration's horror of Democratic attempts to "withdraw", which the Republicans describe as a a "slow bleed strategy".
Hmmm, sounds kinda kinky, doesn't it?
And here (via Greenwald) are Newt Gingrich and Hugh Hewitt talking about how the United States should whip the Iranians if any American sailors are ever arrested:

HH: So how long would you give them, to give them that ultimatum, the Iranians?
NG: I would literally do that. I would say to them, I would right now say to them privately, within the next week, your refinery will no longer work. And within the following week, there will be no tankers arriving. Now if you would like to avoid being humiliated publicly, we recommend you calmly and quietly give them back now. But frankly, if you'd prefer to show the planet that you're tiny and we're not, we're prepared to simply cut off your economy, and allow you to go back to walking and using oxen to pull carts, because you will have no gasoline left.
HH: I agree with that 100%.

Emphasis mine. So Newt Gingrich, who thinks he should be president, would "humiliate" Iran "to show the planet that you're tiny and we're not".
Hmmm, sounds kinda kinky to me.
Greenwald says:

. . . what it's all about -- everything -- is, as Newt put it: we must "show the planet that you're tiny and we're not."
Showing the planet that they're "tiny and we're not" really does sum up, almost completely, the entire neoconservative compulsion, which is the same thing as neoconservatism itself. As I've noted before, they talk about every foreign policy issue with themes of dominance, submission and humiliation as the centerpiece. It's the Abu Grahib Theory of Foreign Affairs, and it actually is quite uncomfortable even to read.