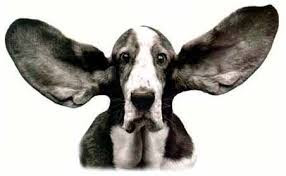 It's like looking at one of those Word Search puzzles -- a jumble of letters until suddenly some actual words pop out at you.
Today's American political scene is increasingly being distorted by so-called "dog whistles" -- incomprehensible jumble language which is actually double-secret-probation code words sending an under-the-radar racist or sexist message
Bush started it, using terms like "wonder-working power" and "Dred Scott" and "just a comma" as dog whistles to the religious right to convince them that he was really one of them at heart.
Now we see Huckabee talking about "vertical leadership" -- an incomprensible term until you realize that vertical is now used by evangelicals to describe their relationship with God.
And with a woman and an African-American man leading the presidential nomination race, the whistles to racist and sexist stereotypes are getting louder all the time.
Like Karl Rove describing Obama as "lazy" -- the whistle is to the right-wing stereotype of the black welfare queen
Like the New York Attorney General describing Obama as shucking and jiving.
Like talking about the "lynching" of Hillary Clinton -- a loaded term when someone is describing how the Obama campaign is criticizing the Clinton campaign.
Like the stream of misogynistic dribble about Hillary Clinton over the last several months, examples too numerous to count.
And like the "Breck Girl" slur against John Edwards, a homophobic dog whistle.
Criticizing this racist and sexist dog whistle language in US politics has nothing to do with "political correctness" and everything to do with the importance of not being sucked into the determined effort by republicans to trash all of the Democratic candidates.
I expect we'll see the same kind of tactics being tried here during the next political campaign. Luckily, Canadian society is not quite as riddled with stereotypes as American culture -- though we do have some -- but we already see Harper and the Conservatives trying to use ridicule rather than substantive debate against Dion and the Liberals.
Listen for dog whistles.

Cry me a river
Iron this, buddy!
War has been declared again in Iraq
Year of the turnip
Standing up to the bully on the block
Reaching out
Ordinary woman
Amateur Hour
Great line of the day
Hold that tiger
Tweets by CathieCanada