Toronto police made a big deal today about they protected Toronto from Black Bloc violence by arresting 900 people.
Except, of course, they didn't.
On Saturday, the Black Bloc vandals were allowed to throw things at police, jump up and down on those artistically-abandoned police cars and then run down Yonge Street breaking windows and uprooting bricks unimpeded.
But on Saturday night and Sunday, even though I heard no reports of projectiles being thrown at police, no broken windows, no looting, no trashed cars, the police were very busy arresting polite teenage girls, Quebecers, reporters, and people shopping for groceries.
And now they seem to think that bullying people who were too scared to fight back was what kept Toronto safe.
According to the police chief, police arrested "dozens and dozens" of anarchists with "Molotov cocktails and other weapons" on Sunday --where these people are now, I couldn't find any news stories to say. I guess at some point, maybe there will be some bail hearings, and then maybe we'll find out just how many arrests of criminals and vandals were actually made. Until then, colour me skeptical.
Torontoist reporter Chris Bird writes:

. . . The cops had a disastrous top-down management strategy, to be sure, but over and over again the story of today was that some individual police were completely and totally willing to be bastards.. . . apparently guilt by association is the next big thing in Canadian policing.

Oh, and there was another large protest today -- to object to the police overreaction. Nobody was arrested this time. 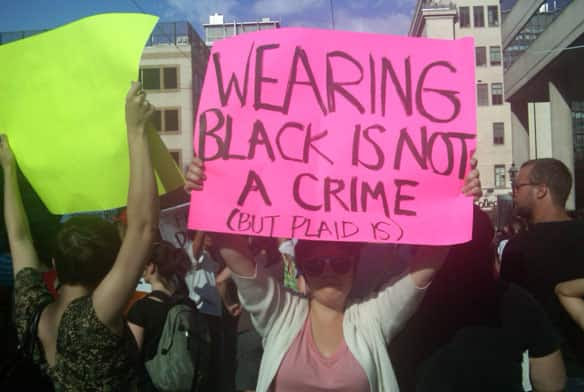 The Canadian spirit is just indomitable.

The Dziekanski Lesson
Confrontation
You know what I like
Let the protesters protest
Now, THAT'S a protest!
What's going on here?
McChrystal is a whiner
Shorter
Cartoon of the day
Shorter
Tweets by CathieCanada