Why I am voting for Trudeau

Why did I vote Liberal? Because Justin Trudeau put on a bulletproof vest, faced a threat on his life and rallied his supporters, while Scheer bailed on a scheduled campaign stop when he saw a dozen teenagers holding protest signs and went for hotdogs instead. #cdnpoli #elxn43
— Vex Murphy (@VexMurphy) October 13, 2019

We didn’t know why we were waiting but we would have waited all night to support Justin Trudeau.
— 🦂🌈Joanne 🌈🦂 (@JoanneCangal) October 13, 2019

And the inimitable Montreal Simon sums it up, as usual: 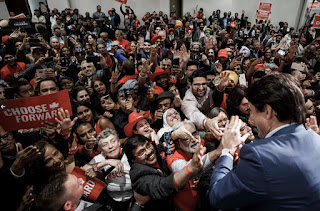