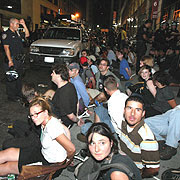 So as we were watching tonight's Law & Order: Criminal Intent, which was about ghost prisoners in a Brooklyn jail, I mentioned to my husband that 1,800 people had been arrested during the Republican Convention and held for two days incommunicado at some pier in New York City. He said "What? I hadn't heard anything about that! Why wasn't there something on the news about it?" Now, my husband keeps up with the news as much as anyone does -- I'm the internet and news junkie in the family -- and he was stunned that he had heard nothing about this either during or since -- nothing in the papers or on the TV news or on the talk shows, and we were watching a lot during the convention. "How did you know about it?" he asked me. I told him I had read about it on the left-wing blogs at the time, but that it hadn't ever got any real coverage, I guessed.
Just goes to show, doesn't it, how a major event effectively disappears if the media are too scared to write about it.
So I started to wonder what had happened since, and found this story from a week ago: USATODAY.com - Protesters challenge NYC arrests
"Despite the sweeping arrests, more than three-quarters of the people arrested during the convention had their cases dismissed outright or dropped in exchange for a promise to behave for six months. Fewer than 10% have pleaded guilty to a misdemeanor or violation. And out of 28 trials, 10 protesters have been convicted. The handful of convictions and large number of dismissals are seen by protesters and their advocates as evidence that police wanted to take demonstrators off the streets and intimidate potential participants into staying home." Gee, ya think?
UPDATE: And thinking about this a little further, I remember that the Democrats were too cowardly to march with the New Yorkers -- so scared were they of being seen as "anti-war". So maybe that's why the police could arrest people so indiscriminately, and the media could ignore the story -- Hillary Clinton and Bill Clinton and John Kerry weren't out there on the front lines supporting these anti-war protestors, nor did they lead a news crew to Pier 57 to bail them out. Well, maybe now with Howard Dean chairing the DNC, the Dems will get some guts and some heart.

That will be news to Zelda
Dispatch from the trenches
Emotional physics
Guantanamo goes mainstream
"I'm not a journalist but I've played one at the W...
Nothing is taboo for these guys
Bring it on
The protesters won
The devil is in the details
If I was a Democrat in Congress...
Tweets by CathieCanada