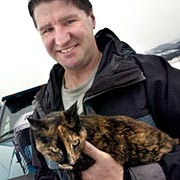 . . . Tuesday morning . . .a pair of passersby spotted the calico cat while crossing a footbridge and called for help. Missoula firefighters arrived minutes later, donned wet suits and launched a rescue boat. Someone had put the animal in a cage, along with a rock weighing about 16 pounds, and tossed it into the Clark Fork River. But instead of landing in the water, it bounced several times on the ice and then became stuck. It's unclear how long the cat had been there. Firefighters took it back to the fire station, dried it off and fed it leftover Christmas turkey and a dish of milk. "It was really skinny, nothing but skin and bones, and had collar marks where a too-small collar had rubbed the fur off its neck. But it was really friendly," firefighter Philip Keating said. Firefighter Josh Macrow decided to keep the cat. After his shift, he took it to a vet and then home to his 12-year-old daughter. "It's the sweetest cat," Macrow said. "It sits on your shoulder when you drive down the road and it curled up with my black Labs this morning." Naming the animal was easy, he said. "We call her Lucky."

. . . when an officer walked into an apartment Thursday night to answer a 911 call, an orange-and-tan striped cat was lying by a telephone on the living room floor. The cat's owner, Gary Rosheisen, was on the ground near his bed having fallen out of his wheelchair . . . He also wasn't wearing his medical-alert necklace and couldn't reach a cord above his pillow that alerts paramedics that he needs help. Daugherty said police received a 911 call from Rosheisen's apartment, but there was no one on the phone. Police called back to make sure everything was OK, and when no one answered, they decided to check things out. . . . Rosheisen got the cat three years ago to help lower his blood pressure. He tried to train him to call 911, unsure if the training ever stuck. The phone in the living room is always on the floor, and there are 12 small buttons — including a speed dial for 911 right above the button for the speaker phone. "He's my hero," Rosheisen said.

who adopted a baby squirrel, Finnegan.

The Horse Sex Story
Office Assistant -- die, damn you, die!
CTV is reporting that there were leaks
A strange remark about 'unconscious' leaks
If you work in public service . . .
"We are selling our souls for dross . . . "
If a soldier dies in the forest . . .
Great lines of the year
Great line of the day
News and new links
Tweets by CathieCanada