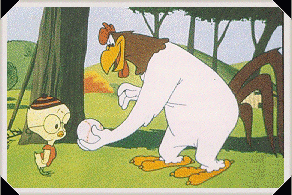 Foghorn says "There's something EUUHHH! about a kid who doesn't like baseball."
I was reminded of Foghorn's sneering distaste when I saw today's story about how Harper isn't going to make any announcements about HIV/AIDS funding during the Toronto conference.
So HIV-AIDS is too "political" now? Since when did politics ever scare Harper?
Nope, I think our Steve is actually saying, "there's something EUHHH! about HIV-AIDS". He doesn't want to be associated with it. Thus, he embarasses Canada before the world and displays his own incurably parochial "small town" attitude -- where the most important consideration is " oooh, what will the neighbours think?"
Well, so what do you suppose two of the world's most influential men, Bill Gates and Bill Clinton, think about our prime minister now?
And here's what some others thought:

Interim Liberal Leader Bill Graham: "this was an opportunity to show leadership and to genuinely help, and if the money comes, great. But it would be a shame that it couldn't be done in a way with the global community that's here, and so many young Canadians could've said, 'We're proud of you.' "
BC MP Keith Martin: "[Postponing the announcement] shows a complete lack of respect for this disease and for the people who suffer from it and for the people who work in it. The government has been missing here. They've showed no presence, no plan, no money."
Stephen Lewis, UN special envoy for AIDS in Africa: "It just shows the chaos of their activity, there's just no focus at all. . . . The Conservatives have known for many months that this conference was coming. They've left a sour taste in everyone's mouth. The entire activist, research, scientific world is now skeptical about Canada's intention and motives. So even when the announcement does come - no matter how good it is - it will be viewed skeptically. They've just done themselves damage."