A new ad campaign to raise money for a memorial asks "where were you?" on 9/11.

A national ad campaign being launched on Thursday features the stories of people who remember where they were when they heard of the 2001 terrorist attacks . . . A historian says the event will be remembered for life by the people who experienced it, in the same way that people recall the assassinations of President Kennedy and the Rev. Martin Luther King Jr . . . The foundation has compiled about 250 "where were you" oral histories . . . 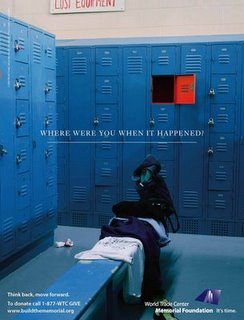 What the hell is our obsession with remembering September 11? We remember it, ok. I don't need a TV commercial to remind me of that day or how I felt. I was there. It took me a long time to get over it. And I most certainly don't need my politicians, or anyone else, trying to drag me back to that day kicking and screaming several times a year . . . Unfortunately we live in a country and a society where the dead aren't just eulogized, they're propagandized. You want an ad campaign? Here's an ad campaign: 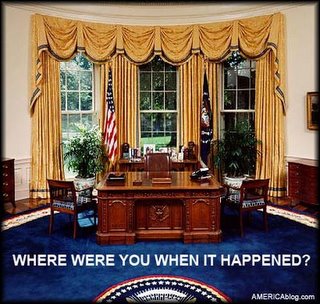 And here is the picture I think Bush really should use: 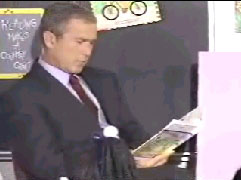 If I could add a photoshop slogan, it would read: "Where was the President? Frozen at the switch...".
I wonder if the project has recorded Bush's own history of that day:

The President was seated in a classroom when,at 9:05,Andrew Card whispered to him: “A second plane hit the second tower.America is under attack.”The President told us his instinct was to project calm, not to have the country see an excited reaction at a moment of crisis.The press was standing behind the children; he saw their phones and pagers start to ring. The President felt he should project strength and calm until he could better understand what was happening. The President remained in the classroom for another five to seven minutes, while the children continued reading.