There are so many Katrina stories where we never find out what happened -- like, did that man and his grandchildren make it, the one who was interviewed by the CNN reporter and who told her about his wife drowning and calling to him to take care of the grandchildren as she was swept away? What about that little boy who cried so hard because they didn't allow him to take his dog on the bus? What happened to the teenager who commandeered the school bus and drove a bunch of people to Houston and they were talking about charging him with theft? What about that little group of survivors hiding in an apartment with their dogs who talked to the CTV reporter? Did that boy from the Convention Centre make it, the one who became a one-man publicist for the people stuck there?
But here's one where we find out some good news, thanks to Digby:

Sept. 5, 2005: In the chaos that was Causeway Boulevard, this group of refugees stood out: a 6-year-old boy walking down the road, holding a 5-month-old, surrounded by five toddlers who followed him around as if he were their leader.
They were holding hands. Three of the children were about 2 years old, and one was wearing only diapers. A 3-year-old girl, who wore colorful barrettes on the ends of her braids, had her 14-month-old brother in tow. The 6-year-old spoke for all of them, and he told rescuers his name was Deamonte Love.
...Deamonte volunteered his vital statistics. He said his father was tall and his mother was short. He gave his address, his phone number and the name of his elementary school.
He said that the 5-month-old was his brother, Darynael, and that two others were his cousins, Tyreek and Zoria. The other three lived in his apartment building. . . . Deamonte began to give more details to Derrick Robertson, a 27-year-old Big Buddy mentor: How he saw his mother cry when he was loaded onto the helicopter. How he promised her he'd take care of his little brother.
Thankfully, the mothers have now been found and they've all been reunited. Late Saturday night, they found Deamonte's mother, who was in a shelter in San Antonio along with the four mothers of the other five children. Catrina Williams, 26, saw her children's pictures on a website set up over the weekend by the National Center for Missing and Exploited Children. By Sunday, a private plane from Angel Flight was waiting to take the children to Texas.
But, how they got separated is every parent's nightmare: The helicopter came and there wasn't room for all. The helicopter personnel told the mothers to put the kids on board and they would return for the mothers.
The helicopter never returned. The kids went flown to Baton Rouge, and the parents ended up in Texas. 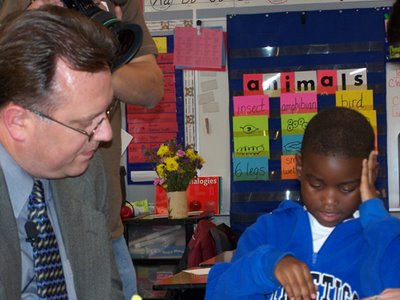 February 2006: Alan Rochkus, principal of Harmony Hills Elementary School, watches Demonte Love, first-grader, complete a math puzzle while a KSAT-12 photojournalist films him. Love rescued six children, ranging in age from 5 months to three years, in the aftermath of Hurricane Katrina in New Orleans, La. He received a Trumpet Award for his heroism.

It does your heart good, doesn't it?