I don't know very much about art or artists, so I decided to do a little research into the winners of the 2007 Governor General’s Awards in Visual and Media Arts:

The Canada Council for the Arts today announced the names of the eight winners of the 2007 Governor General’s Awards in Visual and Media Arts.
Ian Carr-Harris, Aganetha Dyck, R. Bruce Elder, Murray Favro, Fernand Leduc and Daphne Odjig will receive awards for artistic achievement; ceramist Paul Mathieu will receive the Saidye Bronfman Award for excellence in the fine crafts, while David P. Silcox will receive the outstanding contribution award for his work as a writer, educator, cultural administrator and arts volunteer.

Here are some photos related to their work, which I found on the web (there are other photos posted with the Canada Council press release, too): 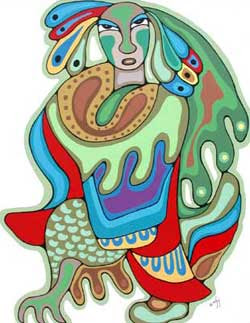 Beautiful, aren't they?
I have often wished I was an artistically creative person -- learning more about art and finding a creative muse for myself is something I do want to do, one of these years.

Continuing the misery
Phoned anyone in the USA lately?
Iraq war protests today
Will Ye Go, Lassie, Go
'Tis a grand day for Brennan On The Moor...
and Finnegans Wake
and Shoals Of Herring!
Great line of the day
When you take the gloves off, your own hands get hurt
More red tape, please
Tweets by CathieCanada