Here's another one of the Scary Iran news stories. This time its about how the US military briefers in Baghdad are saying Iran is getting Hezbollah to kill Americans in Iraq. Apparently, the US has some documents or something, which they are allowing reporters to view in glimpses. McClatchy notes that:

...there was no way to verify the authenticity of the documents independently, some of which Bergner presented on a large-screen monitor.

I'll bet it was PowerPoint slides.
This reminded me of another US slide show back in February in which the US military briefers in Baghdad were saying Iran is supplying explosive devices to kill Americans in Iraq. The reporters got a better look at this presentation, and it apparently fell pretty flat.
I think its the slides -- the US military is apparently entranced with PowerPoint, which is really just a communications tool, sometimes not a very good one.
In Yale professor Edward Tuft's discussion page about powerpPoint and military intelligence, one of the commenters describes the military reliance on PowerPoint:

1. Briefings are often not created by the actual person who will deliver the brief. Subject Matter Experts are tasked with developing content, which then is briefed to a military officer who then is tasked with briefing up the chain of command.
2. When briefing up the chain, information must be put in "words a colonel can understand." And when a colonel briefs a general, the brief must be put in "words the general can understand." This is usually referred to in terms of elevations: from 10,000 feet, or the 50,000-foot view, etc. I've been told to "keep it out of the weeds" -- limit detail, only make general statements.
3. The expectation is that the handout is also simply a printed copy of the briefing slides themselves, so that while the PP slides are being projected on screen, the participants in the meeting are simultaneously reading the printed versions. The projection is used for debate reference once everyone reads the printed slide.
4. Since PP is often used for a "decision brief" only the words that will be approved are to be included in the slide.

Another commenter describes how a slide can become a military order. He refers to an excerpt from the Thomas Ricks' book Fiasco:

McKiernan had another, smaller, but nagging, issue: He couldn't get Franks to issue clear orders that explicitly stated what he wanted done, how he wanted to do it, and why. Rather, Franks passed along PowerPoint briefing slides that he had shown to Rumsfeld. . . . That reliance on slides rather than formal written orders seemed to some military professionals to capture the essence of Rumsfeld's amateurish approach to war planning. . . . It was like telling an automobile mechanic to use a manufacturer's glossy sales borchure to figure out how to repair an engine.

Here is one of those slides -- it shows how Iraq reconstruction was supposed to work: 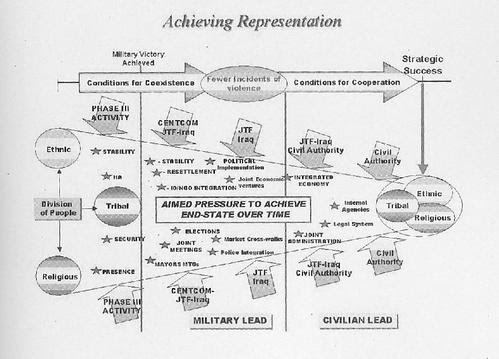 Just flash on that for 10 seconds. With mythical faux-precision, the little marching arrows and stars show that every day in every way things are going to get better and better in Iraq until everybody reaches Strategic Success, at which point the Tooth Fairy will shoot an arrow down from heaven and...well, Phase Three.
Here's another one, from October, 2006 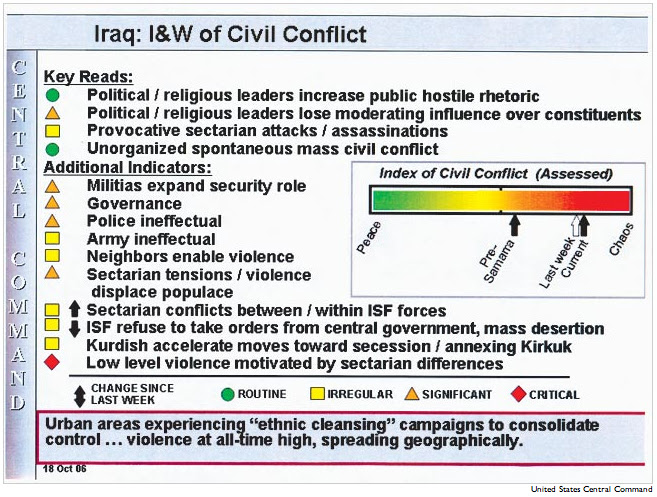 What could anyone make of seeing such a mess on a screen? Here are some of the things Tufts says about this slide:

The slide reports performance data--a list of phrases, with each phrase accompanied by a measure of performance. This is what the tables in the sports section, mutual fund page, and weather page of newspapers do very well. Those designs are much better for reporting performance data than the slide format here. In sports and stock market tables, each phrase is accompanied by multiple measures of performance, often over varying time-periods. All that won't fit on the slide; this suggests that we should use better reporting method than PP, instead of abbreviating the evidence to fit the slide. As the millions of readers of sports tables each day demonstrate, people can easily manage large tables of information. Thus those being briefed in the military should ask: Why are our presentations operating at 2% of the data richness of routine tables found in the sports section? Let the viewers read and explore through a range of material; different eyes will search for different things in the evidence. The metaphor should be the cognitive style of the sports section (or weather or financial newspaper pages) not the cognitive style of PowerPoint.
There is no cloud of uncertainty or error history associated with the editorializing color. At times, such color codings suggest an excess of certainty.
The Iraq slide above provides some relevant but thin and overly short-run time-comparisons: 2 arrows on the left showing "change since last week," and the "Index of Civil Conflict (Assessed)", which sort of compares "Pre- Samarra" with "Last week" and "Current". And there's a potent time-comparison in words: ". . . violence at all-time high, spreading geographically."

Then again, maybe its not just the PowerPoint. As one of Tufte's other commenters notes:

As someone who remembers watching US military briefings during the VN war, I can confidently state that PowerPoint is not a necessary requirement for producing obfuscated piles of meaningless crap.
There is a story in the biography of John Paul Vann by Neil Sheehan in which Vann's map of precincts in his district is returned by central command for having too few precincts colored in "white" (our side) and too many red (them) and pink (in issue). How's that for graphical information.

Speaking of who's winning, the British say they have lost Basra.