Sounds like the US housing market is still awful, at least in some places -- Las Vegas prices are down 54 Per cent from the peak, though Dallas prices are down only about 5 per cent from their highest.
Needless to say, this is not good news for Canada's forest industry.
Here's a New York Times story about recent events in the Florida community of Cape Coral, where a third of the 65,000 homes are affected by foreclosures.

. . . the fable [was] that waterfront living beyond winter’s reach exerts such a powerful pull that it justifies almost any price for housing [which] propelled the orgy of borrowing, investing and flipping that dominated life here and in other places where January doesn’t include a snow blower.
. . . speculators had simply been selling to other speculators, making the real estate market look like a Ponzi scheme. The ensuing crash was breathtaking. By the winter of 2007, median housing prices in Cape Coral and the rest of Lee County had fallen to about $215,000, down from a high of $278,000 in 2005. By October 2009, they had fallen to near $92,000.
Somewhere on that long, steep downhill path, what was once portrayed here as a momentary if wrenching setback seeped into the community’s bones, embedding lowered expectations and fear.

Here's a cartoon that sums up the blame game now underway 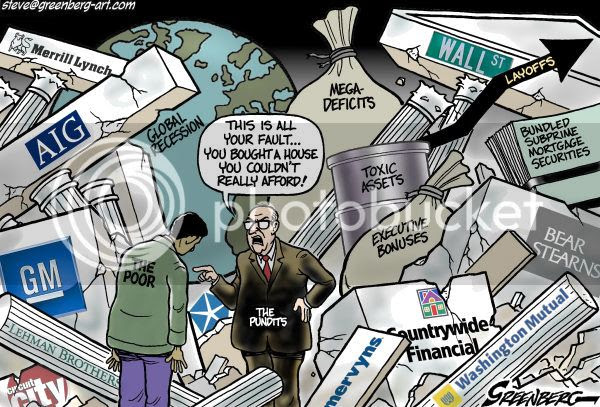