Black Bloc -- still crazy after all these years 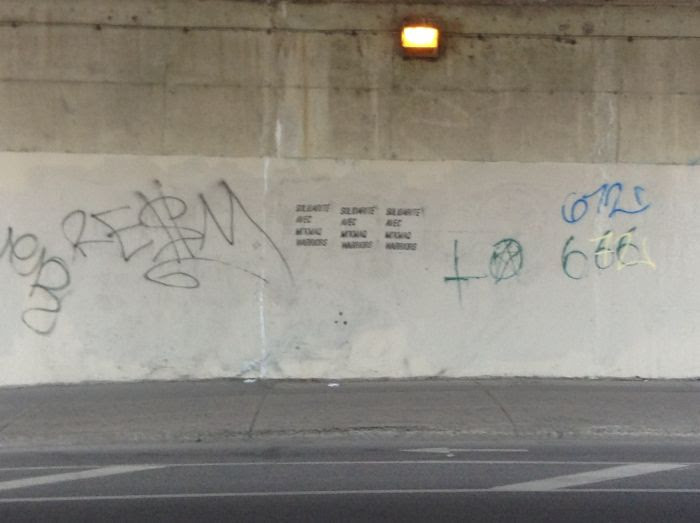 Two articles - here and here - provide an interesting analysis of the Black Bloc protest tactic and what it means for economic and social protest movements around the world.
And this lengthy report appears to have been written by someone who participated in the Black Bloc violence himself during the G20 -- he calls himself Zig Zag.
Far from endorsing the conspiracy theory that Toronto police deliberately let the Bloc run wild on Saturday to justify the billion dollar summit security cost, Zig Zag asserts that police incompetence, lack of maneuverability, and inexperience allowed the Bloc to burn police cars and break windows in spite of its own ineptitude and disorganization -- which were so bad that, if police response had been nimble and smart, most of the Bloc members could likely have been caught when first police car was set on fire.
It was news to me that there were several vandalism incidents across Canada during the week after the summit which the communiques left by the perpetrators indicate were done in solidarity with the G20 Bloc vandalism. Zig Zag lists the following:

In Calgary on the night/morning of June 26/27, an RBC and McDonalds were vandalized . . . On the night/morning of June 27/28, two Bank of Montreal branches were vandalized in Toronto, with windows being smashed and ATM machines being glued . . . On June 30, a Kiewit construction company truck was arsoned in Vancouver, with a communique targeting Kiewit for its work on the Sea-to-Sky Highway expansion as part of the 2010 Olympics, and declaring solidarity with the anti-G20 resistance. . . . On July 1 . . . two RBC branches were vandalized in Montreal . . . On July 2, a Canadian Forces recruiting centre was bombed in Trois-Rivieres (between Montreal and Quebec City).

Also interesting to view the photos in this photo essay as you read Zig Zag's article.

Disconnect
Amply covered
Why Ignatieff will be Prime Minister
Great line of the day
What the Cons really think about Canadians
Read a newspaper, why don't you?
Great line of the day
Ain't nobody here but us chickens
Imagine who he would appoint if he WASN'T reformin...
Why Obama doesn't get respect
Tweets by CathieCanada