Why Ignatieff will be Prime Minister 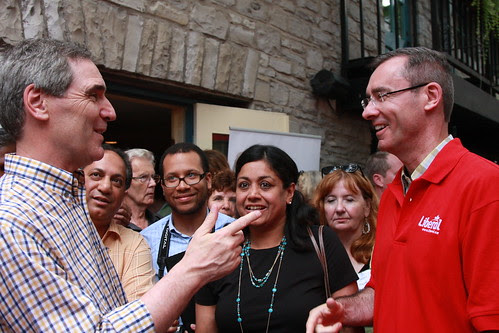 We read story after story about how Canadians don't like Michael Ignatieff, but I don't believe it -- when they see him and listen to him, they like him.
And here's why -- he engages with people, he listens to what people say, and he says what he thinks.
At Susan Delacourt's Toronto Star blog from the Liberal Express bus, she quotes Iggy replying to a question about how the Liberals can regain favour with the national media.

It’s a waste of time in politics to blame the messenger. It is a waste of time to try to manipulate the messenger. These guys have got a job to do. ... (CTV national reporter) Roger Smith is five feet away from me here and he’s got a job to do. And we welcome him here and he can report any darn way he wants. And if I get it wrong, it’s my problem, not his problem. So let’s get out of the Harper mindset, which is: we’ve got to control this, we’ve got to spin this, we’ve got to manipulate this, we’ve got to keep them 45 miles away, we’ve got to set up a roster of which questions get asked and which can’t get asked. If the bus breaks down, we don’t tell them some story. We try to get a replacement bus and try to get them on the bus as soon as possible. And we did. I don’t know any other way to do it, other than ‘what you see is what you get’. And you go to Canadians and you make your pitch.

Try to imagine Stephen Harper ever saying something like that.
Today's news is full of the most recent attempt at ratf**king Ignatieff, the story about how he is going to go and work for the University of Toronto. After yesterday's news was filled with Conservative pearl-clutching. I guess we have all summer to look forward to this.