"Creeping G20-ism" is my term for the insidious attitude that says its OK for police to do whatever they want to whomever they want because any civilian who gets in their way must just be a thug anyway.
A couple of stories in today's Star Phoenix demonstrate some push back against creeping G20-ism.
Here's the first one:

Judge Barry Singer said officers had no authority to detain Kirkland Douglas Brown on Aug. 12, 2009, and their arrest and detention of him was unlawful.
"From my observations in court, the police in Saskatoon and the officers involved in this case, in particular, believe that section 209 of the Traffic Safety Act gives them the authority to stop any vehicle and determine the identity of the driver.
"This is not the law," Singer wrote.
Singer threw out police evidence and found Brown, 50, not guilty of obstructing a peace officer by disobeying a signal to stop, failing to produce a driver's licence and possessing a prohibited weapon.
Singer had already dismissed a charge of assaulting a police officer and heard evidence it was Brown who was injured during the arrest, not the officers.

And here's the other:

Saskatoon police officers are no longer able to charge people with assaulting peace officers without the approval of their superiors.
The policy was implemented two months ago, after the charge was thrown out in two cases involving men who said they were assaulted by arresting officers, not the other way around.. . . In March, a Crown prosecutor stayed three charges of assaulting a peace officer while attempting to resist arrest. The charges had been laid against Charles Vanneste, who alleges he was tackled by three uniformed officers, punched in the head and kneed in the back after making a comment to a uniformed sergeant.
Vanneste spent the night in a police cell and was charged with assaulting three peace officers and uttering a threat to cause death.
All of the charges were stayed the day his trial was set to begin.

And Joe Warmington at the Toronto Sun continues to fight the good fight. The tone of disgust in his latest column is palpable -- he is writing about a father whose son, Dorian Barton, was beaten during the G20 protests but whose police attackers are hiding behind a Blue Wall:

His purple bruises lasted all summer, his shoulder was fractured and he still does not have full use of it. The internal damage and suffering is hard to measure as he pursues legal action.
His father just wishes police would do the right thing and apologize to his son, whose charges of obstructing police and unlawful demonstrating were thrown out by the court. With or without criminal charges, the reality is Dorian was nothing more than a victim of an assault right in front of hundreds of police officers.
“You’d think one of these officers would be law abiding enough to recognize the one who inflicted this damage to my son,” said Ted.
Many are and may do exactly that. Some have told me they are offended at being ordered from above to condone unlawful and uncivilized incarcerations, false arrests, rubber bullet shootings, forced kettlings, the displaying of false evidence and illegal searches while letting the real criminals go on a rampage untouched.

Here's one of the photos of that beating: 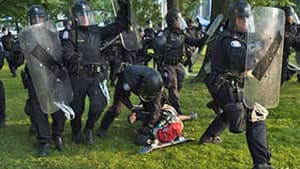 Get back on the horse
Another sanity test
Trivial
Haven't we all felt like this some days?
Shorter
Our binary future
Gonna get my picture on the cover
What next?
Now the desperate search really begins . . .
Happy Warrior
Tweets by CathieCanada