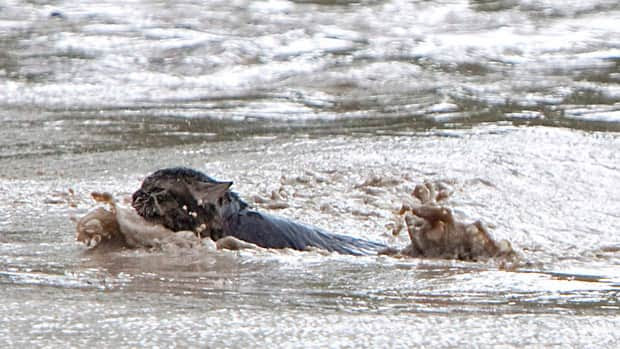 Momo the swimming cat becomes "a symbol of hope" for the Alberta flood:

Yeats's mother, Lori Yeats, said her son was caught off-guard when the truck suddenly went underwater. The windows wouldn't open, trapping him and his pet inside, and the windshield began to crack.
"He couldn't get out, so he had to smash out the back window with his elbow and, of course, the cat was trying to beat him out," she said.
Momo's plunge into the muddy flow moments later was to be expected, she said, noting the indoor cat has a longtime fascination with water.
"She will crawl in the tub with [Kevan] or crawl in the shower with him, so that was probably a good thing that she's been around water a little bit," she said.
There was no doubt her son would jump in after his beloved pet, she said.
"Kevan and that cat are tight. In fact, I was giving him heck for going back and rescuing his cat, he says 'Mom, it's like my baby, you know, I couldn't live with myself if something happened,"' she said....
Momo — who is believed to be part Maine Coon — may have developed a distinctive swimming style.
Lori Yeats said her son noticed his cat was "using her tail like an alligator does" during their watery escape.
"Their tail kind of wiggles back and forth when they're swimming and they use it as a rudder, and she was using her tail like that when he was swimming behind her. He said he couldn't keep up with her, she was doing so well swimming in the water," she said.

Our London home away from home
James Gandolfini
The smear is backfiring
Well, that was ugly
Wait for it
Security state? Or just a fantasy state?
Solidarity
One question
Today in tweets
I guess the Harper Cons just cannot be trusted wit...
Tweets by CathieCanada