"I'm not racist! How dare you say that?"

Those of you calling for Stephen Miller to be fired by the White House because he has been revealed (again) to be a white supremacist do not understand that's the reason why he was hired.
— David Rothkopf (@djrothkopf) November 12, 2019

Employers favor men not because they are prejudiced against women, but because they have the perception that men perform better on average at certain tasks. https://t.co/RRcBSRCQfA
— Quartz (@qz) November 12, 2019

There's something bizarre about the way some people define "racism" (and sexism, and homophobia, etc, but I'll just use "racism" as a shorthand to mean all of these things.)

They recognize it, and condemn it, but just cannot admit that they, themselves, could do it.  Its an odd form of "othering" where the "other" is actually an uncomfortable part of their own personality.

So they can say "I'm not racist, I just don't like black people" (or Aboriginal people or Asian people or whoever) of "I'm not sexist, I just don't think women can do things as well as men can" or "I'm not homophobic, I just don't like gay people". And they remain blithely ignorant of their own racist impulses and behaviour.
You see, they KNOW that being racist is bad.  So it makes them VERY uncomfortable to think of themselves as racists.  So when they DO racist things and THINK racist thoughts, they have to tell themselves there is actually nothing wrong with what they did or thought because their motives are pure and their actions are just.  They take refuge in the belief that they are actually just telling the truth.
So Don Cherry can talk about "you people".  And Trump can say there are "good people" on "both sides" of Charlottesville.  And neither of them will ever even think they have said anything racist, because after all they don't think of themselves as racists. Today, we see pundits who are actually surprised that Stephen Miller has been "revealed" to be a white supremacist.  Of course he is -- who else would come up with a government policy to imprison 70,000 immigrant children? Only a racist could ever think up something so grotesque and cruel, and then get upset to be booed out of a Mexican restaurant.
Here's the tell -- racists think we all actually secretly agree with them. They think we just don't admit it because we're all Politically Correct cowards, whereas the racists are courageous truth-tellers.  "Now admit it, you know I'm right!" is what they will say. 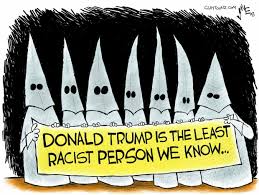 Posted by Cathie from Canada at Wednesday, November 13, 2019