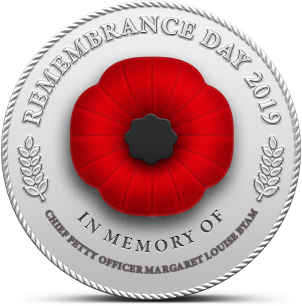 Chief Petty Officer Margaret Louise Byam -- my mother.  I have often wondered now why she did it, but she died before I thought to ask her.
A small-town Prairie girl, the youngest of four daughters, she joined the Wrens during World War 2 and off she went to Halifax to help Canada win the war. She wasn't the only one in the family to go - her sister, my aunt, was a war nurse in Italy, and my father-in-law piloted Lancasters out of England.
But I always admired my mother, who got a teaching degree and then put that career on hold and went to war for the sheer love of her country. She found that she loved Halifax, too, as it turned out. But after the war ended she came back to the Prairies to marry my father.
They are almost all gone now, the greatest generation, and here we are watching fascism rise again around the world.  I hope it doesn't get to the point that we have to fight again. But if we do, there are still Canadians like my mother who will go.