On the side of King John and the Sheriff of Nottingham 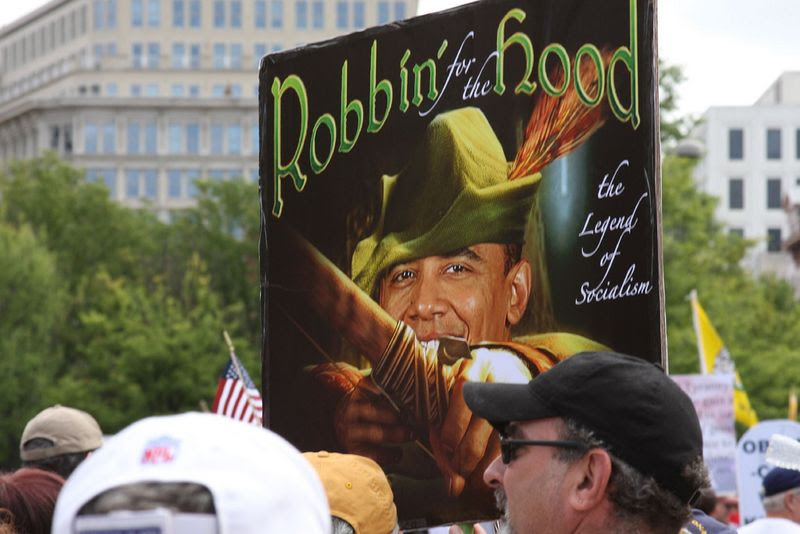 Amanda Marcotte has an interesting post about some of the basic assumptions of the anti-Obama /teabag /wingnut movement and their little march on Saturday.
One of the highlights is her discussion about this photo:

. . . whoever made this sign seemed to think that using Robin Hood as a stand-in for the villain was a good idea. Most of us understand that Robin Hood is the hero of the stories about Robin Hood. But wingnuts tend to reflectively see Robin Hood as a villain. This isn’t the first time I’ve been puzzled by this. In Texas, opponents of laws that would create more equal spending between school districts have deemed such laws “Robin Hood Laws”. Again, they don’t see a problem with trotting out a traditional hero as a villain and expecting everyone else to play along.

I guess robbing the rich to give to the poor isn't OK if you're one of the rich -- or if you'd like to be. Or if you think that King John actually was better than the rest of us. Glenn Greenwald explores this theme some more, saying that the basic anger is about spending money on the "undeserving":

...the poor minorities and other undeserving deadbeats who, in right-wing lore, somehow (despite their sorry state) exert immensely powerful influence over the U.S. Government and are thus the beneficiaries of endless, undeserved largesse: people too lazy to work, illegal immigrants, those living below the poverty line. That's why Joe Wilson's outburst resonated so forcefully among the Right and why he became an immediate folk hero: he was voicing the core right-wing fear that their money was being stolen from them by Obama in order to lavish the Undeserving and the Others -- in this case illegal immigrants -- with ill-gotten gains

Matt Tabbi described this in April as a peasant mentality:

. . . when the excesses of business interests and their political proteges in Washington leave the regular guy broke and screwed, the response is always for the lower and middle classes to split down the middle and find reasons to get pissed off not at their greedy bosses but at each other. . . . actual rich people can’t ever be the target. It’s a classic peasant mentality: going into fits of groveling and bowing whenever the master’s carriage rides by, then fuming against the Turks in Crimea or the Jews in the Pale or whoever after spending fifteen hard hours in the fields. . . . A good peasant is loyal, simpleminded, and full of misdirected anger.

'Nuff said
Seeing
The new "Progressive Conservatives"
Proud to be a member of that 'left-wing fringe gro...
Tech support cheat sheet
Turning myths upside down
Great line of the day
Watching the speech
Why America is doomed
Camelot update
Tweets by CathieCanada