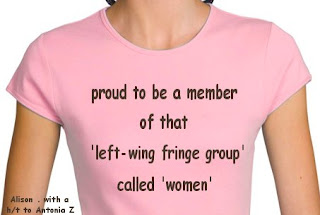 Alison has followed up brilliantly on Antonia Zerbisias' suggestion about a new t-shirt slogan: "Proud to be a member of that 'left-wing fringe group' called 'women'".
This follows from Harper's derisive smear against the Court Challenges program, which the Conservatives shut down because they didn't want their legislation to be challenged by what Harper is now calling "left-wing fringe groups." Yeah, like "women". After all, we wouldn't want any more cases like these:

. . . landmark cases, many fought by LEAF, the Women's Legal Education and Action Fund – a group clearly overrun by rabid fringe feminists.
They intervened in "left-wing fringe" court cases such as Torres v. Minto Management (2002), which prevented a landlord from increasing a single mother's rent by 41 per cent just because her husband had left the building.
Then there was the "left-wing fringe" case The Queen v. Keegstra (1990), which kept a Holocaust denier from teaching his anti- Semitic ideas to Alberta schoolchildren.
Or how about that "left-wing fringe" case Brooks v. Safeway (1989), which forced employers not to discriminate against pregnant staffers.