Joe Klein finally gets it -- the US-Iraq War was legally indefensible, corrupt, and morally wrong:

The essential principle is immutable: we should never go to war unless we have been attacked or are under direct, immediate threat of attack. Never. And never again.

Exactly.
Personally, I based my opposition to the Iraq War on the United Nations. If a country cannot convince the United Nations Security Council to approve an aggressive war -- or cannot convince even a significant minority of the Council that a war is justified -- then its wrong to go to war, it isn't justified.
What we already know about what happened in Iraq during this war is sickening --from White Phosphorus in Fallujah to vicious ethnic cleansing in Baghdad. Once the US soldiers are gone, the stories yet to be told will be truly horrifying. 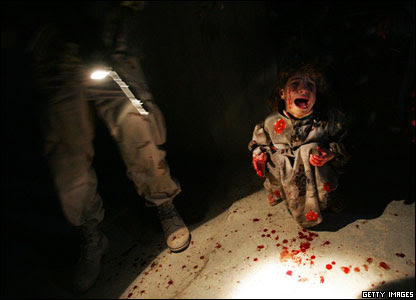 Paging Elmore Leonard...
I thought it was just me
Just a coincidence, I'm sure
Psych!
Cancer country
Stupid day
Leadership
How I spent my summer vacation
Long weekend
These people are nuts - part 2
Tweets by CathieCanada