How I spent my summer vacation

Actually, just hanging around the house, doing housey things, it was fun and I feel somewhat organized for the first time in about two years -- its amazing how much junk accumulates, isn't it. I've been making trip after trip to take stuff to the Mennonites, which seem to be just about the only charitable agency left here which still handles their own donations.
But I've also been having fun reading other people's blog posts about their vacations.
Like from Doctor Grumpy:

Today we went whitewater rafting. Our guide, I swear, was a guy named Stoner.
[Middle son]Craig, of course, was horrified at the idea he might get wet, and so insisted on sitting in the middle of the raft. [Eldest son]Frank and [daughter]Marie loved the idea of getting soaked, and even wanted to help row. So Stoner gave them each a paddle.
For a while they were somewhat helpful, and it kept them busy. Until we hit a stretch of non-rowing quiet water.
Somehow a shouting match broke out, and I turned around just in time to see them beating each other WITH THE PADDLES while Craig tried to hide in the bottom of the raft. Before I could yell at them to stop, Frank sent Marie’s paddle into the river. Craig, trying to avenge his sister, stood up and knocked Frank’s into the river.
And now we were heading into white water, with half our paddles gone. Stoner was clearly horrified to be watching his company’s property floating behind us, and began frantically steering the boat to try to get them, while Mrs. Grumpy and I paddled away. The next few seconds sent some big waves crashing over the raft, drenching everyone (including Craig). He began hitting Marie on the grounds that it was her fault he was wet, since she’d lost her paddle.
Fortunately, we were able to collect the paddles at the other end of the rapid run. But we spent the rest of the day hearing from Craig about how this was “the worst day ever” because he got wet. All the kids, when we got back to shore, agreed that they liked the river rides at amusement parks better. Wimps.

And from Lance Mannion on the Maine coast:

There be whales here
You can categorize your own brand of geekitude by whether the title of this post made you think of Herman Melville or Star Trek or both.
Late this afternoon, after we’d set up our chairs and towels on a high spot on the beach at Nauset, I spotted a white-hulled sailboat far out on the horizon. The rest of our gang rushed headlong towards the water to throw themselves into the breaking waves but I stayed put with my binoculars, thinking that a closer look would show me that another Edward Hopper painting had come to life for a moment.
That happens down here, Edward Hopper paintings coming to life, and it’s no surprise, since the Cape was one of his favorite subjects.
Today happens to be Hopper’s birthday---he’d have been a hundred and eighteen---and it would have been a nice coincidence if it was one of his sailboats hauling by. 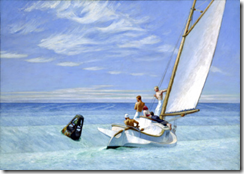 But just as I got my sights trained on the boat something black and rounded broke the surface in the foreground. It rose with a splash and disappeared with another toss of white foam and I thought:
“Whale?”

It was hot this week­end. How hot was it? Here’s one of the neigh­bors at Alex’ house: 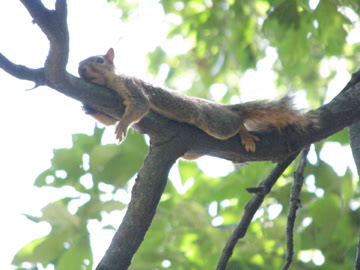 Alex said he’s never seen a squir­rel relax like this. I have, once. It was on a pic­nic table, and it was stretched out, belly down, in much this fash­ion. It was also on a hot day. Spriggy would stretch out like this, terrier-style, but almost always on a cool sur­face, like a tile floor, or even wood. That pic­nic table wasn’t cool, but maybe it was, rel­a­tive to every­thing around it.

And John Cole now has two dogs instead of just one:

In Retrospect It Was a Bad Idea
The dogs were driving me crazy and I couldn’t get any work done as apparently three walks before ten am is not enough, so I took them to the park to run. And they ran about 200 yards away from me, and Lily promptly spent the next minute and a half rolling in something. This picture can not describe the stench, but if I had to guess what it was, I would guess the rotting rancid remains of Satan’s bowel.