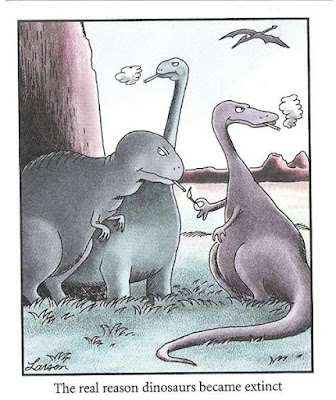 Of course dinosaurs and humans never co-existed - dinosaurs went extinct 65 million years before humans developed, and the CBC knows it, as do all paleontologists.
But no scientist wants to put their job on the line with our nutty right-wing government over such a stupid issue, just because the CBC is trying to play Got-ya! with Scott Moe:

"When CBC requested to speak with a paleontologist from the Royal SK Museum to clear [up whether dinosaurs lives with humans], that request was routed through to the education minister's office, which said the minister wasn't available." https://t.co/S6cx22w5U0

Remembrance Day was Friday - here are some tweets I noticed especially:

Today on #RemembranceDay, Animal Justice is reflecting on the lives of the countless animals who have died in battle & who continue to be used in warfare today. These animals are not valiant, willing participants—they are victims.#CanadaRemembers #LestWeForget pic.twitter.com/3xZoZiapQe

In their last NHL game before heading off to serve for Canada in the Second World War, Bruins' Milt Schmidt, Woody Dumart, and Bobby Bauer were carried off the ice by their opponents, a remarkable show of respect and camaraderie #CanadaRemembers #LestWeForget pic.twitter.com/nlGxujOgzw

Lieutenant Wilf Gildersleeve served in the Second World War and fell in love with a Dutch woman following the Liberation of the Netherlands. Watch their #HeritageMinute for the story. #CanadaRemembers pic.twitter.com/mZs30qfA6j

This is the kind of stuff that I love about Twitter and I hope we can figure out some way or some place to keep it, in spite of how Musk is trying to destroy it:

Broken ice and a lone penguin make for a thrilling adventure.pic.twitter.com/ehx1FqNHfc

Art on ice floats using only charcoal and water by @davidpopaart pic.twitter.com/0NblMTnmr9

What is your favorite Steven Spielberg film of all time, folks? pic.twitter.com/jYYSM70pMk

The national networks and the Washington media were so quick to deride Biden's "saving democracy" speeches this fall, but it turns out that the American public took him seriously - Biden named and shamed Trump and the Republicans for trying to get MAGA-fascists elected, and America was listening:

Some big, under-covered news coming out of the election may be—if it comes to pass—that all 6 insurrectionists running for Secretary of State in major 2024 battleground states lost. We’re on our way to that eventuality. And it’d mean that voters had *made safe* the 2024 election!

Thanks to President Biden’s leadership and the vast majority of Americans who rejected the Big Lie, Democracy has been given new Life. Don’t know about the rest of you, but I feel great!

Another US election, another "Land doesn't vote, people do" style map showing the election results. pic.twitter.com/XmMTSUKJof

This is a fuck around and find out moment. Republicans have become, simply put, the party against democracy. The party of Trump, the party of January 6th, and the party of election denialism. That’s not popular with most voters.

Turns out even moderate fans of a more limited scope of abortion rights doesn’t want to *actually* live in the The Handmaid’s Tale, no matter how tedious the cosplayers are.

Some of the MAGA people running were very creepy -- in the end, most of them didn't get elected.
Most, but not all.
I don't know if this is a real account or not, but wouldn't it be hilarious if this really was Laura Ingraham's brother?

Hey Ann, can you address the same message to my sister?! Her comeuppance is long overdue. @AnnCoulter @IngrahamAngle https://t.co/EzuOG9GCUa

In Ukraine, this was a beautiful moment:

The moment a grandmother kneels before her grandson soldier who’d been fighting for Kherson liberation. pic.twitter.com/f6JkBiPmMD

Twitter is full of videos showing how happy the people of Kherson are to greet the Ukrainian troops - I saw one describe it as a "Liberation of Paris" moment.
One of the reasons I am so happy that the Dems have kept control of the Senate (and maybe also the House) is that it means Ukraine will continue to get US support.

we criticize hollywood for lazy tropes but our two main antagonists right now is a former kgb agent with a penchant for poisoning and an emerald mine heir who wants to live on mars. if these were bond villains they’d be dismissed as caricature

Here is the Lily-Tweet debacle in all its glory - Musk is like a spoiled child bashing a new toy into the ground then crying because it broke:

Eli Lilly apologizing for a fake tweet but not for charging $714.87 for a carton of insulin. https://t.co/Dzjn0whvga pic.twitter.com/0TmiAGXEKk

UPDATE—Just learned that Eli Lilly executives are raging and furious at losing $20 billion in market cap from this stunt with @TwitterBlue. It’s too bad they don’t see their own damn insulin price gouging as the actual problem. Karma @LillyPad, karma. pic.twitter.com/AzXRpMH8mi

Let's be clear. Eli Lilly should apologize for increasing the price of insulin by over 1,200% since 1996 to $275 while it costs less than $10 to manufacture. The inventors of insulin sold their patents in 1923 for $1 to save lives, not to make Eli Lilly's CEO obscenely rich. https://t.co/5ZpZkqY0f9

And things went downhill from there.
Finally, GO HUSKIES!

Here's more from this afternoon's win over the Thunderbirds, as the Huskies punched their ticket to next Saturday's Uteck Bowl in Antigonish, N.S.https://t.co/PCdZhUlyjk

Posted by Cathie from Canada at Sunday, November 13, 2022